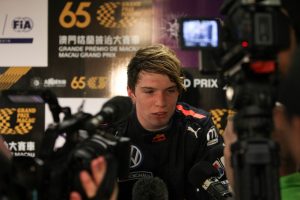 Two-time Macau Grand Prix winner Dan Ticktum has confirmed that he’ll likely be racing in Super Formula next year, although he is still aiming for a Formula 2 drive.

After winning the Macau qualification race yesterday, Super Formula congratulated Ticktum and suggested he would be racing full-time in the championship in 2019. Ticktum partially supported that claim in the post-grand prix press conference, saying he was “almost 100% likely” to be racing there next year.

Motopark, which runs the Red Bull Junior Team member in Formula 3, is also moving into Super Formula next year and is the favourite to field Ticktum, or possibly his F3 team-mate and Red Bull stablemate Juri Vips.

Ticktum’s ambitions to race in F2, which he got experience of in pre-season testing this year, are currently being stymied by budget issues, which could harm his chances of a Formula 1 seat in 2020 seeing as F2 offers more FIA Super Licence points than Super Formula.

“It’s not the teams fault it’s so expensive. [I’m looking for] a reasonable deal, and if so I will try to participate in F2 as well [as Super Formula]. This is unlikely I would say,” Ticktum said.

The 2018 European F3 runner-up was barred from testing an F1 car earlier this year due to a lack of Super Licence points. His second Macau GP win has earned him five more, meaning he has 35 of the 40 required to race in F1, and also silenced naysayers who believed his 2017 win came down to luck.

“Obviously there’s a lot of talk about me getting in an F1 car this year. I think If I keep performing well I’ll have a chance to test. I just need to keep my performance up, 100% at all times, because if I start to show them I’m maybe not the all-rounded driver or the most professional driver, I won’t get this opportunity. So that’s where I am at the moment.”