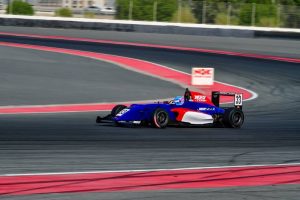 Max Defourny stormed into an early championship lead in the 2018-19 MRF Challenge, with a brace of race victories in the season opening weekend at Duabi Autodrome.

Danial Frost sealed the final place on the podium, initially pressuring Chadwick for second before fading in the second half of the race. Series veteran Dylan Young finished in fourth with Michelangelo Amendola completing the top five.

British Formula 4 race winner Patrick Pasma was sixth, giving him reverse-grid pole position for the second race. However he fell to third at the start while Frost seized the lead from third on the grid. Frost held the lead to the chequered flag ahead of Czech teenager Petr Ptacek, who triumphed in a thrilling battle with Defourny for second place. Chadwick and Amendola were fourth and fifth.

Defourny’s attempts to extend his points lead in the third race where thwarted when he made a poor start from pole. ADAC Formula 4 midfielder Andreas Estner was the one to take advantage, taking his first win of the year. Chadwick was second, with Defourny third. Frost had a miserable race, finishing down in 11th place. Ptacek was fourth with Amendola fifth again.

Pasma took his second reverse-grid pole of the weekend, and this time was able to convert it into victory. Defourny put the Finnish driver under intense pressure but he ultimately fell short by 0.576s. Amendola took his maiden podium with Frost and Chadwick completing the top five.

Formula Renault Eurocup veteran Defourny made a huge statement in the fifth and final race of the weekend. He took a dominant victory, with the biggest winning margin of his car racing career so far, beating Chadwick by 9.454s. Frost took third ahead of Pasma and Estner.

Defourny leaves Dubai with a healthy 28-point cushion to Chadwick, with two more rounds of the season remaining.