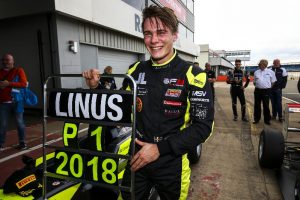 Over the last few years, Swedish talent has risen to the top across all forms of motorsport and found considerable success.

Marcus Ericsson has been in Formula 1 for five seasons and will be racing in IndyCar next year, as will Formula E star Felix Rosenqvist. The World Touring Car and Rallycross championships have been won by Swedes in the last two years, and DTM race-winner Joel Eriksson came second in last weekend’s Macau Grand Prix.

Linus Lundqvist is on the same journey up the motorsport ladder, this year dominating BRDC British F3, and the spark that started his passion off is rather unusual.

?I’ve been told that I was always interested in cars,? Lundqvist reveals to Formula Scout. ?And especially how wheels work and how they roll, so even before I knew how to walk it was with a car in my hand.

?By the age of six I was first introduced to go-karts, I got to ride along in a tandem kart because I was too small to drive myself, and six-year-old me thought that it was the best thing ever.?

While he won a couple of championships during his first years in karting, his name became known when he moved into single-seaters in Formula STCC Nordic in 2015. He finished fourth in his first season, then dominated the Formula Renault 1.6-based championship a year later, winning 10 of the 14 races. His success meant his next step would be taking place outside of Sweden, and he picked British Formula 4. 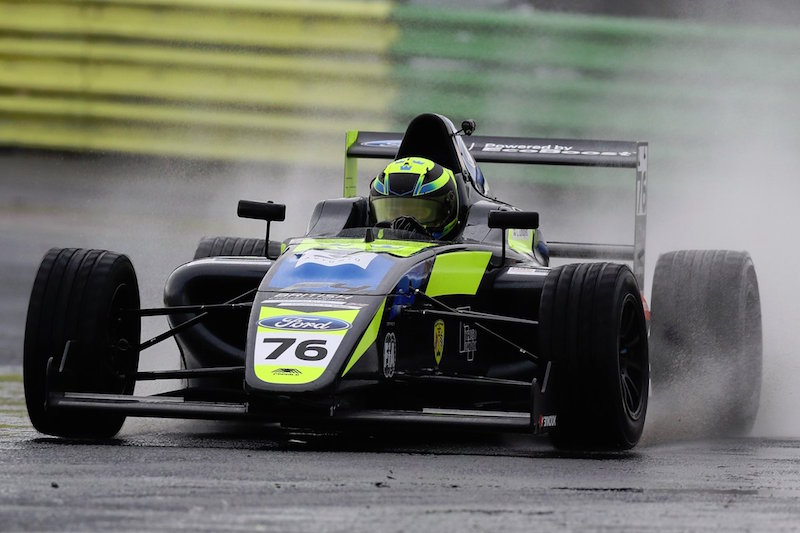 ?First the decision was made to race in the UK because I think it’s the heart of motorsport really, if you look into it.

?And better culture-wise, because we looked at different F4 series like the German and Italian F4, and the language was a big thing as well.?

Lundqvist signed with Double R Racing, who he felt more comfortable with than his other options, and although he gelled with the squad, his season was a mixed bag. Five wins put him fifth in the standings, but he retired from almost a quarter of races. He failed to finish all three races in the Brands Hatch season opener, but responded a round later with two poles and his first win, with the latter coming in less than ideal circumstances.

?So I got my first pole there, finished second in the first race, another DNF due to technical difficulties in race two, and was leading race three.

?And then – yeah, the [Billy Monger] incident happened and they red flagged it. I got my first win, but during those circumstances it didn’t really matter.?

Lundqvist graduated full-time to BRDC British Formula 3 for 2018 after enjoying a one-off at Spa Francorchamps in 2017. The decision to move into the championship came late in the off-season though, as Lundqvist faced budget issues. 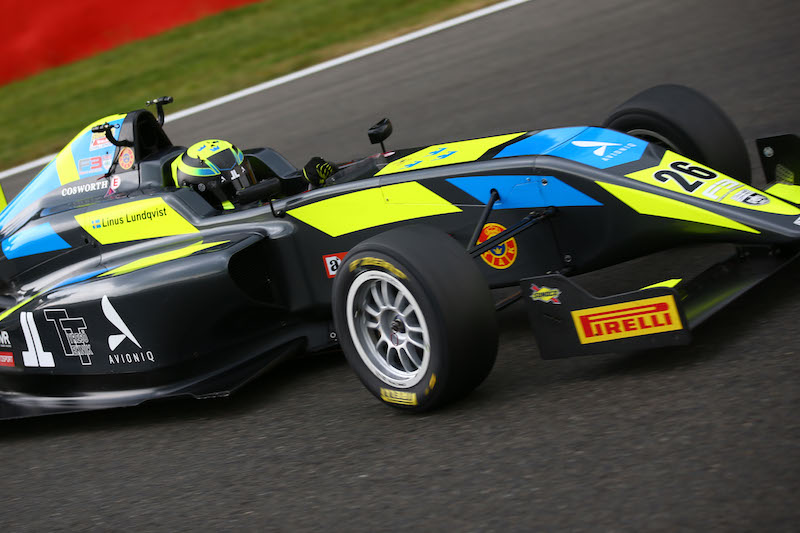 ?We decided at the end of the season that taking another step up would be the right thing, but then, being a racing driver is very much about getting your sponsors together and getting a budget. So really, not until February – I didn’t know even if I was driving because we didn’t really have the budget together.?

He eventually got the backing required to compete, which was only possible through a company that Lundqvist had set up himself at the end of 2017.

?I started my own company back in Sweden, and it is just like a normal company that you can invest in and sponsor. That’s what we built it around, and that’s what made it possible that I can stand here today and race.?

For Lundqvist, running the company and racing were both linked and as important as each other, and he sees it as a positive challenge rather than it getting in the way of his on-track performance.

The 2018 season started well with a win in the first race at Oulton Park, ahead of surprise title rival Nicolai Kjaergaard and the returning Monger. And while he didn?t finish on the podium again that weekend, it was a huge improvement on his season start the year previous.

It wasn’t until the sixth race of the season at Rockingham that he topped the points again, and he extended that at Snetterton and Silverstone where a run of podiums, including two wins, were consolidated by fourth and sixth in the reversed grid races. By the penultimate round at Donington it looked like he had the title wrapped up. 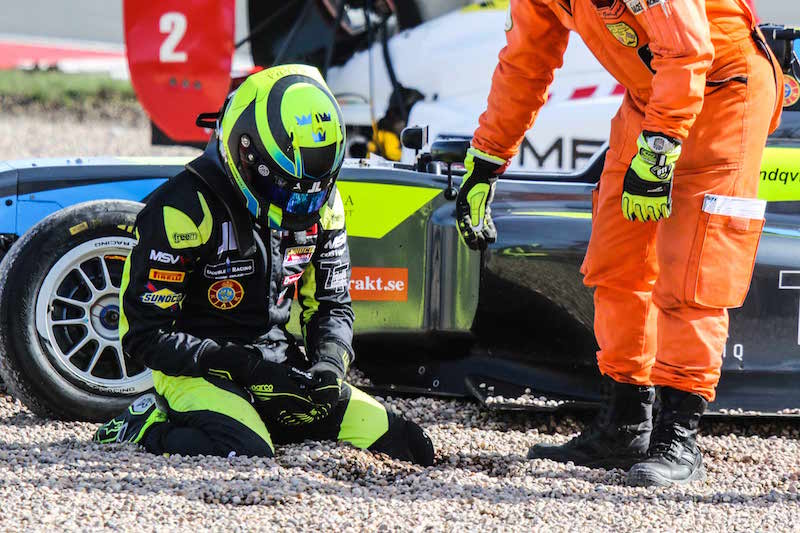 Instead he endured his worst weekend of the season. In race one he could only muster eighth, and while he went from 11th to third during the opening lap of race two – which he believes was one of his best ever laps – a red flag meant the race was restarted in the original order. He ended up retiring soon after having got involved in an accident, and because the race took place in the dry it left him near the back of the grid for race three, set by fastest race lap times.

Three wins in four races for Carlin’s Kjaergaard kept him in mathematical contention, and gave the Dane some hope that a turnaround could actually happen. It didn?t. Lundqvist won the first race of the Silverstone season finale, and with it the British F3 title. Overall he was very happy with how his season panned out.

?We’ve been really solid, both looking at my performance and the team’s performance, it’s been mega throughout the year. So I would say literally from the first race we’ve been on it. I think the whole grid has improved, and you always take it bit-by-bit and you can always be better at something.?

The transition from F4 to F3 didn’t overwhelm Lundqvist, and he feels his adaptability is a skill that could be?needed at any time for him to be a successful driver. He proved this by starring in a Porsche Carrera Cup Scandinavia cameo in August. As well as winning the British F3 title, Lundqvist also won the Sunoco Whelen Challenge, meaning he’ll be lining up on the Daytona 24 Hours grid next year.

?At the end of the day, if you want to be a good racing driver you’re going to be able to be quick in anything, and at the end of the day it’s just a steering wheel and four wheels and you’ve got to drive it as quick as you can.?

?My main target is to be the first Swedish Formula 1 world champion, so I’m trying to progress on that ladder. The target is to do some international F3 championships next year, but it’s very much a budget question.”

The double amputee made history with his return to racing this year, even if he missed out on a much-desired victory.?A podium in his first race weekend back set his season off on a high, and he took a double pole at Donington, the location of his life-changing crash. He took three more podiums, but could never do better than third,

From the start of the season Kjaergaard was Lundqvist?s closest rival, and briefly led the championship. He was able to take the title fight to the final round at Silverstone when it should’ve been over at Donington, after capitalising well on Lundqvist’s difficult weekend. A breakout season for the Dane.

He says: ?In general we’ve had good pace, good car, and that shows [as] we are second in the championship. Unfortunately a bit too far behind Linus, but that’s how it is.?

Financial difficulties meant 2017 British F4 champion Caroline had a messy year, which started in America, but his three round stint in F3 showed his talent, winning twice and picking up two more podiums.

He says: “I think when I came back [from America] and I wasn’t doing much, Trevor [Carlin] said ‘I’ve got a spare seat for Spa and Donington’, and we just jumped at it while we could, we had nothing else. And obviously Brands as well, I wasn’t meant to do it, but Clement Novalak had a hand injury, so I jumped in then as well.”

Single-seater rookie and Ginetta Junior champion Gamble looked completely at home in a F3 car. A podium in his third race and then a win the next round, even with disqualifications out of his control at Rockingham and Donington, ended with fifth in the standings.

He says: ?A lot of ups and downs. Obviously a few wins, and a few poles as well. We?ve learnt a lot, and we?ve struggled at quite a few races as well. It?s been a good season for me to learn.”

After a successful Spa-Francorchamps cameo in 2017, Lundqvist?s British F3 season couldn’t have gone too much better. A win in the first race of the year started off a campaign where he led for the majority. And while it went to the final round after a difficult weekend in Donington, he made sure the title was his.

He says: ?I would say we were fairly on it from race one. Looking back at it now we’ve had a cracking season, so I’m very happy.? 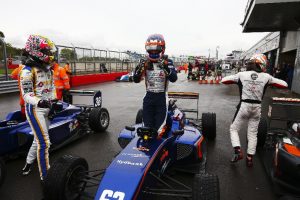