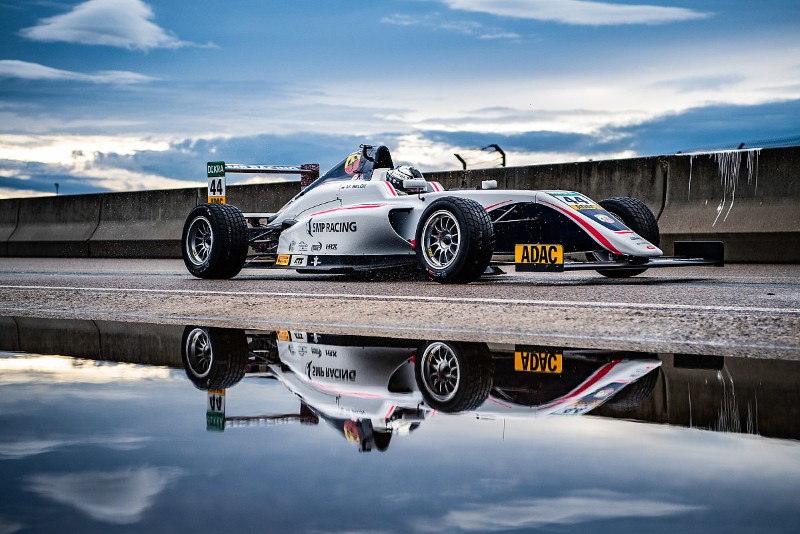 Mikhael Belov took his first ADAC Formula 4 win in the first race of the Sachsenring season finale, while Theo Pourchaire extended his points lead after a dramatic battle.

Sauber junior Pourchaire started from pole, but a poor start on a wet track immediately dropped him behind R-ace GP pair Belov and Gregoire Saucy.

Form man Dennis Hauger got passed by Arthur Leclerc, another Sauber junior, for fourth but didn’t have time to reclaim the position before the safety car was required to retrieve Joshua Duerksen from the gravel after he span off on a greasy patch at Turn 13. His Mucke Motorsport team-mate Nico Gohler had also span on the warm-up lap.

Once the race resumed, the title contending Sauber juniors and Van Amersfoort Racing’s Hauger immediately started battling and Hauger passed Leclerc for fourth at Turn 4. The Red Bull junior then started attacking and passing Saucy, who had been demoted by Pourchaire.

Leclerc and his team-mate Alessandro Ghiretti both made errors, albeit Ghiretti’s being a car-induced electrical one, that dropped them out of the battle for the top five positions, with Belov initially establishing himself a lead.

The battle for second between Pourchaire and Hauger brought them back onto the tail of Belov, who was having to defend into Turn 1 on each lap in the second half of the race.

Pourchaire also attacked at the high-speed Turn 13 lefthander twice, but was squeezed onto the outside kerbs on both occasions.

On lap 15 of 20, Belov squeezed Pourchaire to the pitwall and Hauger nearly made it past Pourchaire. A lap later he completed the move, with Pourchaire going too wide in his attempt to take the lead around the outside of Turn 1.

Hauger then repeated Pourchaire’s brave Turn 13 effort, this time staying even more committed on the outside of the corner. but ended up losing second place to his title rival and Saucy a corner later.

The trio then went three-wide into Turn 1, with Hauger on the inside but going too deep, Pourchaire in the middle but locking up, and Saucy on the outside but getting the cutback. Saucy exited the corner ahead, but Pourchaire had better traction for the next turn and held on to second.

Hauger failed to make it back past Saucy, meaning Pourchaire’s lead has grown to seven points.

Leclerc recovered to sixth behind Prema’s Paul Aron, keeping himself in title contention, with Ghiretti managing to score points in eighth.

During the safety car period, VAR’s Ido Cohen was reported to the stewards after running through the gravel where Duerksen’s car was being recovered.