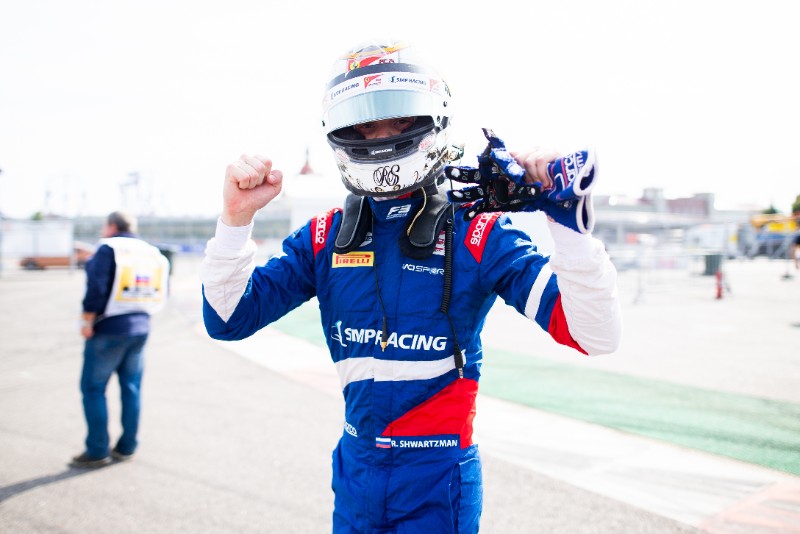 Robert Shwartzman won the inaugural FIA Formula 3 Championship title in race one at Sochi, despite losing the race win on the last lap to Prema team-mate Marcus Armstrong.

Second-place starter Jehan Daruvala was the only man who could deny Shwartzman wrapping up the title one race early, but he needed to win the race and hope for a pointless race for Ferrari junior Shwartzman.

At the start of the race, poleman Shwartzman was jumped by third-placed starter Armstrong. However, the third Prema of Daruvala suffered the worst start – falling to fifth.

Shwartzman was then demoted to third when Trident’s Niko Kari passed him at a safety car restart. Kari then wrestled the lead from Armstrong on lap nine of 20.

Armstrong hit back, but misjudged his braking point at Turn 1 and took to the escape road. He rejoined behind Shwartzman and Hitech GP’s Leonardo Pulcini in fourth place.

Shwartzman reeled in Kari and took the lead, but Armstrong was busy recovering positions already.

He closed to within DRS range of Shwartzman on the final lap of the race and made the move for the lead into Turn 1 for his first race one win of the year.

Second place marked Shwartzman’s ninth podium of the season, and second car racing title following his 2018 Toyota Racing Series triumph, with Kari taking his first podium since the opening round of the season.

Hitech’s Juri Vips crossed the line in fourth place but was demoted to the eighth position with a 10-second penalty, after he punted ART Grand Prix’s Christian Lundgaard while under safety car conditions.

This promoted his team-mate Pulcini into fourth, with Daruvala unable to recover from his poor start and finishing fifth.

Championship debutant David Schumacher finished in 22nd for Campos Racing, after he was spun around on lap 11.