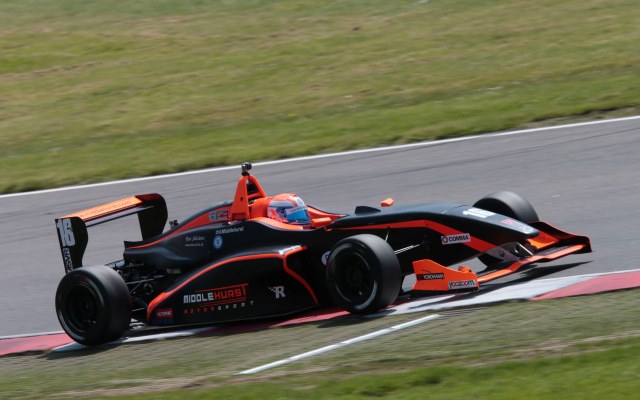 Chris Middlehurst scored his first win in BRDC F4 in race two at Brands Hatch as others made errors ahead of him.

Will Palmer led from the reverse grid pole position, but was involved with contact at Druids with HHC team-mate Sennan Fielding, dropping them both down the order and affecting third-placed Jordan Albert too.

Arjun Maini swept into the lead ahead of Middlehurst, who had initially gone backwards after starting on the front row. Middlehurst was then handed the lead when Maini spun at Sheene on lap eight.

Maini recovered to push Middlehurst to the line, but the 2013 Protyre Formula Renault held on to win by 0.325 seconds.

After starting tenth, George Russell also stayed out of trouble to claim third and his first podium for seven races. With chief rival Raoul Hyman finishing one spot behind in fourth, Russell’s championship lead increased from one to three points.

Albert matched his best result yet of fifth from race one for the newly-Caterham backed SWR squad, while Struan Moore took sixth ahead of Palmer. Tom Jackson was eighth, Fielding recovered to ninth and Alfredo Zabalza completed the top ten.