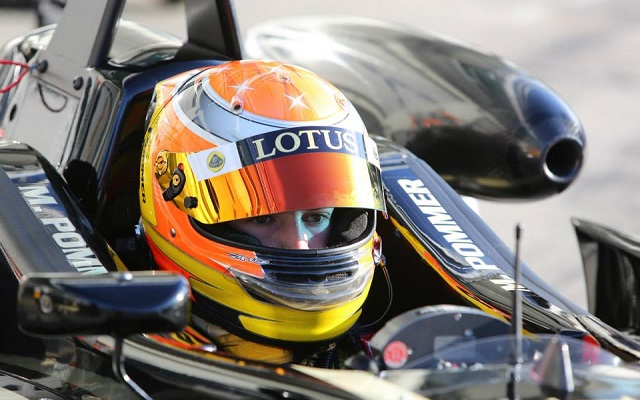 Lotus driver Markus Pommer once again demonstrated his dominance in the 2014 German F3 season by taking a comfortable win in the wet in race three at Nurburgring.

After finishing just seventh in the reverse-grid race, Pommer started the final event from pole and led every metre of the distance to record his ninth victory in 15 races.

It took the German just one lap to establish an almost two-second lead over nearest rival Sam MacLeod, who took second from Indy Dontje as the Dutchman bogged down from the front row.

MacLeod and Dontje soon established themselves as the main threats to Pommer’s victory, keeping up with the championship leader over the first ten minutes and then ramping up the pace.

However, once MacLeod and Dontje closed in, Pommer responded immediately and began pulling away as the duo kept each other occupied in the fight for second.

Dontje appeared to have the pace on MacLeod, shadowing the Scotsman throughout the middle stint of the race. He finally tried a move with five minutes remaining on the clock and almost managed to stick his car on the inside of MacLeod’s, but ended up spinning on the drying surface.

By that point, Pommer was already five seconds in the clear, so MacLeod ended up settling for second, while Nabil Jeffri inherited third.

Dontje recovered to fourth place, finishing ahead of Nicolai Sylvest and Weiron Tan.