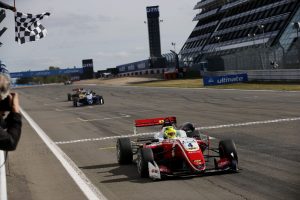 Mick Schumacher took a controlling fifth victory of the season at the Nurburgring, meaning the German has won more times than anyone else this year.

Schumacher beat Prema team-mate Robert Shwartzman to pole, and after handling the Russian well at the first corner on lap one had to do it all over again when a safety car was called out to clear Hitech GP’s Enaam Ahmed from the gravel.

At the restart he was just as assured, and built up a 2.5 second lead before another safety car in the second half of the race when Ahmed’s team-mate Ben Hingeley got barrelled into by Motopark’s Marino Sato into the first corner. Sato was out on the spot, while Hingeley dragged his car back to the pits.

Once again Schumacher was on form at the restart, and this time built up a 1.5s lead within a lap. He extended that by almost two seconds in the remainder of the race to repeat his race one triumph, helped by Shwartzman coming under pressure from championship leader Dan Ticktum.

The Motopark driver looked at taking second on a couple of occasions going into the first corner, but the risk was too high and he settled for third and a reduced championship lead of 16 points over Schumacher. Shwartzman’s second place means he has now risen to seventh in the standings.

Prema team-mates Marcus Armstrong and Ralf Aron, both title contenders, had rather anonymous races in fourth and fifth, with Alex Palou equalling his race one finish of sixth for Hitech.

A fierce battle for seventh was won by Ticktum’s Motopark team-mate Jonathan Aberdein, with Prema’s Guan Yu Zhou rising from outside the top 10 to finish just behind him. Carlin’s Sacha Fenestraz and Ferdinand Habsburg finished ninth and tenth, benefiting from Motopark’s Sebastian Fernandez skating off at the hairpin with a few laps to go thanks to a flat left-rear tyre.

After his first lap altercation with Ahmed, Juri Vips ended up finishing 15th, and is now level on points with Armstrong for third in the standings.