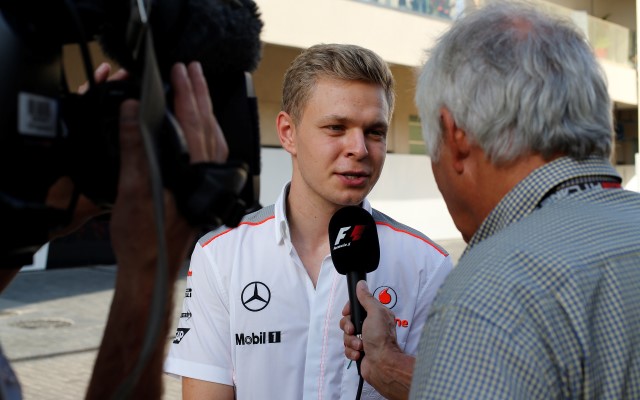 McLaren have decided to promote Formula Renault 3.5 champion Kevin Magnussen into one of their own F1 race seats for 2014, multiple sources are reporting.

Autosport and the BBC say that although a contract has not yet been signed, team management have taken the decision to replace Sergio Perez with Magnussen.

Part of McLaren’s driver development programme, Magnussen impressed the team with his performances in young driver tests in Abu Dhabi in 2012 and at Silverstone in July this year.

The team had been in negotiations with other squads to find a 2014 race seat for the Dane but, as PaddockScout analysed the possibility of last month, they will now promote the rookie into their own car.

Son of Jan Magnussen who made his F1 debut with McLaren in 1995, Kevin won the Danish Formula Ford title in 2008 and then finished runner-up in the Formula Renault 2.0 NEC to more experienced team-mate Antonio Felix da Costa. He was third in German F3 in 2010, followed by a move to the British series where he took second place with seven race wins. He was seventh in his first campaign of FR3.5 last year before winning five races on his way to this year’s title.

A full analysis of Kevin Magnussen’s step up to a McLaren race seat will follow in the coming days.