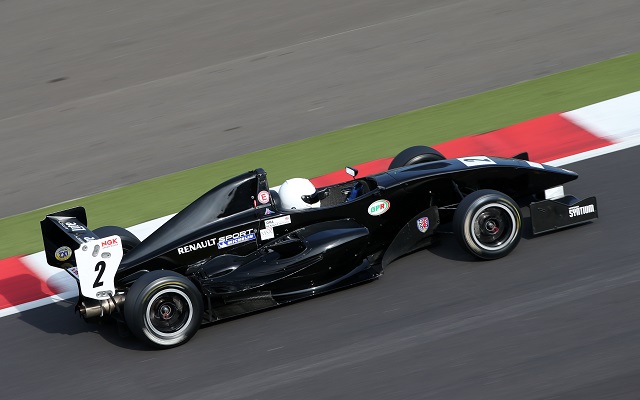 British karting graduate Alex Gill will complete MGR Motorsport’s lineup for the 2013 Protyre Formula Renault Autumn Cup, which will be taking place during the weekend of? November 16-17 at Rockingham.

Gill, 16, has an impressive CV in karts, which includes titles in Super 1 National championship in two classes – Cadet in 2009 and KF3 in 2012. The youngster made his car racing debut earlier this fall, taking an impressive best finish of ninth during the Protyre Formula Renault series finale at Silverstone.

“Although I had very little time in a car prior to the meeting at Silverstone I was able to learn a lot from doing the last round of the main championship”, said Alex. “Working with MGR since then, we have been able to build on that experience and I?m really looking forward to the Autumn Cup. I know I will have a competitive package as I will be using the car Jorge Cevallos ran this year”.

Gill will drive for MGR alongside Matteo Ferrer, whose entry was announced earlier.

“Our initial impressions of Alex are very, very good”, stated team principal Mark Godwin. “For someone with only a handful of days in a car behind him it?s been like working with a pro. He?s very capable, has a good understanding of everything and I think he?s going to be looking at some good results at Rockingham.”