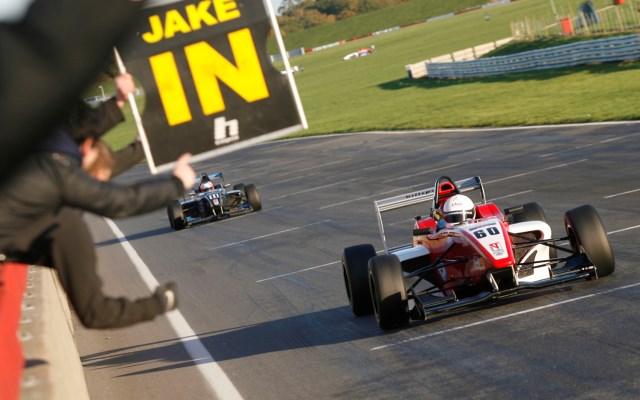 Jake Cook claimed a second win of the day in the fourth and final BRDC F4 Winter Championship race at Snetterton.

Starting from pole position, the Hillspeed driver made a good start to keep the lead ahead of Falco Wauer as the safety car was called on the opening lap after Matteo Ferrer spun.

Cook opened up a one second margin with a strong restart and held the lead until the finish despite a brief scare.

“I got a decent start for the first time in quite a while,” said Cook afterwards. “I managed to hold it in the first corner before the safety car came out and my restart after the safety car is probably the best I’ve ever got, and I think I made a second on Falco right there.

“I then made a big mistake at the hairpin on cold tyres, I locked up and almost went off and was lucky to keep the lead. After that I just had to be consistent and putting the laps in. To win again is great and I can’t complain at all. Yesterday was a bit of a shocker but today’s been great and we’ve picked ourselves up well. I can’t see why we can’t do it again at Brands.”

Will Palmer rounded out a promising debut weekend in single-seaters by claiming the final podium spot, forcing Saturday double winner Matty Graham into a mistake on the last lap.

Sennan Fielding finished less than two tenths of a second behind Graham at the line with Pietro Fittipaldi also close behind in sixth. Fredrik Johansen and Dimitris Papanastasiou again completed out the finishers.

Graham holds a two point lead in the standings, with Cook and Wauer tied for second place ahead of the concluding four races at Brands Hatch on 23-24 November.