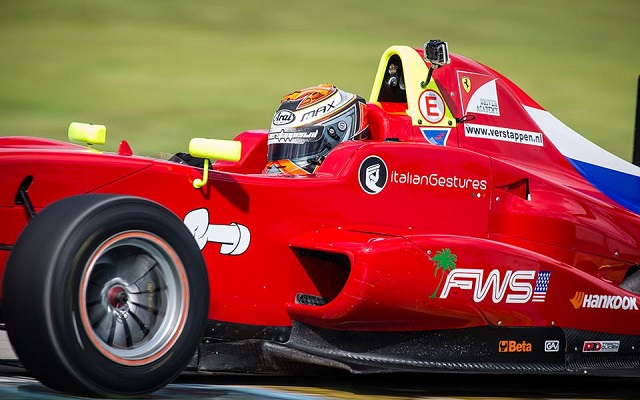 Dutch karting graduate Max Verstappen emerged as the standout performer in the four-session practice day of the Florida Winter Series round at Homestead as he topped two of the timed runs and set the quickest overall lap.

Antonio Fuoco was the driver to shine in the opening session as he took over at the top of the timesheets early on and would go unmatched until the checkered flag with a personal best lap more than 0.4s clear of nearest rival Verstappen. The Dutchman secured second with his final attempt, narrowly beating out Tatiana Calderon and Ed Jones, with Raffaele Marciello rounding out the top five.

Fuoco managed to carry his dominant streak into session two as he found himself virtually unmatched throughout the first half of the allotted time. However, he would be soon dethroned by Verstappen, who put in a number of benchmark laps and recorded the best time of the day. Calderon took second ahead of Dennis van de Laar, with Jones demoting Fuoco to fifth.

The third practice outing saw limited dry running as the session wound up rained out halfway through. Calderon made the best of the changing conditions and topped the timesheets, leading Verstappen, van de Laar, Nicholas Latifi and Marciello. Canadian Latifi then recorded the quickest time of the remainder of the session in wet conditions.

The drivers took to a drying track in the final practice session of the day and, while Fuoco would again lead much of the session, it was Verstappen who posted the best time in the closing seconds. Latifi slotted into second, with Fuoco, Jones and Lance Stroll making up the rest of the top five.