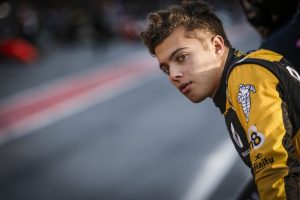 Max Fewtrell believes his chances of winning this year’s McLaren Autosport BRDC Award should be ‘a bit higher’ on his second appearance as a finalist.

Renault Sport Academy member Fewtrell won the Formula Renault Eurocup title last weekend, capping a season in which he became the first driver to win three races in a row for four years.

Fewtrell won the British Formula 4 title in his first full season in single-seaters in 2016, and finished sixth in the Eurocup as a Renault junior last year. He made it to the final four for MABA, and lost out to Red Bull junior Dan Ticktum.

The McLaren simulator role has been dropped from the Award’s official list of prizes for this year, meaning Fewtrell’s Renault allegiances won’t make an impact on him enjoying the full toasts of success were he to be the winner.

“I?d like to think my chances are a bit higher this year,” Fewtrell told Formula Scout.

“Obviously coming in, knowing what to do and driving pretty well at the moment. I feel good within myself and next week should be really fun, I?m looking forward to it.”

The tests to decide the MABA winner take place on Wednesday and THursday, and include track runs in?Ligier LMP3, MotorSport Vision Formula Two and McLaren GT3 cars. The winner will be announced at the Autosport Awards on December 2.