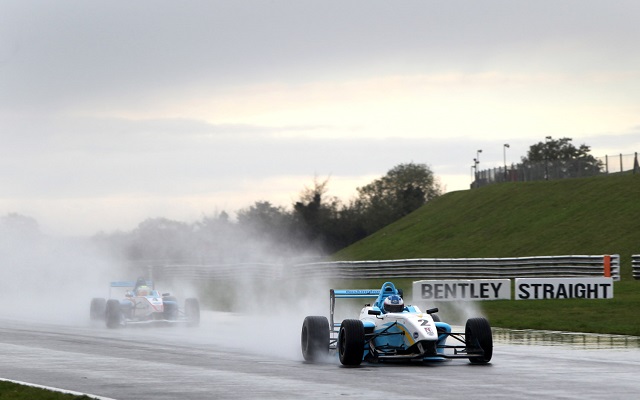 Matthew Graham, the BRDC F4 Winter Series championship leader, won the penultimate race of the final round at Brands Hatch, bolstering his chances of taking the title.

Having lined up on pole, Graham enjoyed a smooth start and led after the opening lap. His lead only increased as the race went on and, despite the rain getting much stronger in the second half, the Douglas Motorsport driver managed to cruise to victory.

A rather heated fight for second unfolded behind. While Pietro Fittipaldi slotted into second off the line, he soon came under pressure from front row starter Sennan Fielding, who set the fastest lap just before the conditions plummeted.

The heavier rain favoured title contender Jake Cook, who began to fight his way through the field, eventually taking Fittipaldi for second. However, just as Kieran Vernon also passed Fittipaldi, Cook spun, letting the duo through.

As such, while Graham took a comfortable victory out front, Vernon and Fittipaldi completed the podium. Cook and Fielding rounded out the top five. Falco Wauer took sixth, ahead of Fredrik Johansen and Malgosia Rdest.

Dimitris Papanastasiou was ninth two laps down, while Will Palmer cruised to tenth after damage ruled him out of contention. Matteo Ferrer was the only non-classified runner, going off on lap one.

In the standings, Graham leads Cook by 17 points, with Fielding a further six down. 30 points are available in the final race, but, as one worst score gets dropped, Graham will only lose the title if he’s disqualified from the final race.