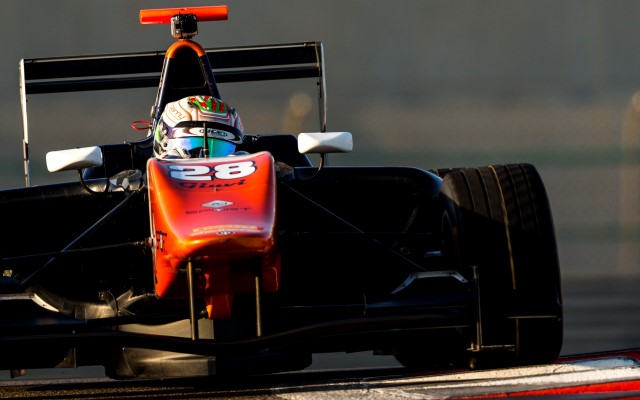 Matt Parry led the way for Trident in the opening session of GP3 post-season testing in Abu Dhabi, with the Briton joined by three rookie compatriots in the top five.

Joining the team that ran Luca Ghiotto in his title challenge after finishing eighth in his rookie season for Koiranen, Parry hit the top of the times at the end of the session with a lap of 1m55.800s.

He displaced fellow Trident tester Antonio Fuoco – sixth in his maiden campaign for Carlin – and the Italian was then relegated to third by Eurocup Formula Renault 2.0 champion Jack Aitken, testing a GP3 car for the second time with Koiranen.

Kevin Jorg, returning to a GP3 test after two years away, was sixth for Trident ahead of Steijn Schothorst (Campos).

Ralph Boschung, driving for Status as new team DAMS evaluates drivers, was eighth ahead of Koiranen’s Matevos Isaakyan with the top 10 rounded out by European F3 star Charles Leclerc of ART.

Japanese F3 driver Nirei Fukuzumi (ART) triggered a red flag by hitting the barriers at Turn 1, with two other stoppages were caused by Pedro Cardoso (Campos) and Tatiana Calderon (Status) coming to a halt.