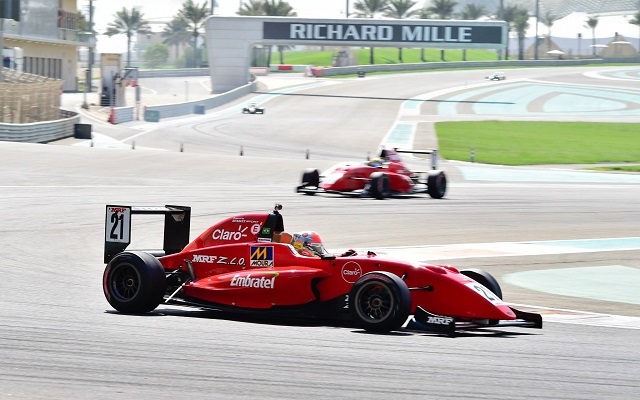 Nobuharu Matsushita and Pietro Fittipaldi picked up victories on the second day of the MRF Challenge opener at Yas Marina in Abu Dhabi.

As he did in the first race of the weekend, Honda-backed GP2 driver Matsushita dominated race three from pole position, finishing five seconds clear of Jake Dennis.

Tatiana Calderon beat Fittipaldi to third place, with Tarun Reddy also getting past the Brazilian for fourth.

Troitskiy started the final race from pole with a shot at a second reverse-grid race win, but it was Fittipaldi who took charge from alongside him on the front row of the grid.

Fittipaldi enjoyed another five-second winning margin as Reddy and Calderon fought over second.

The pair had clashed at the end of race two as they battled for the win, and this time Calderon edged ahead of Reddy for second place by a mere 0.013s at the line.

Matushista came through for fourth ahead of Dennis, with Troitskiy pushed back to sixth by the end.