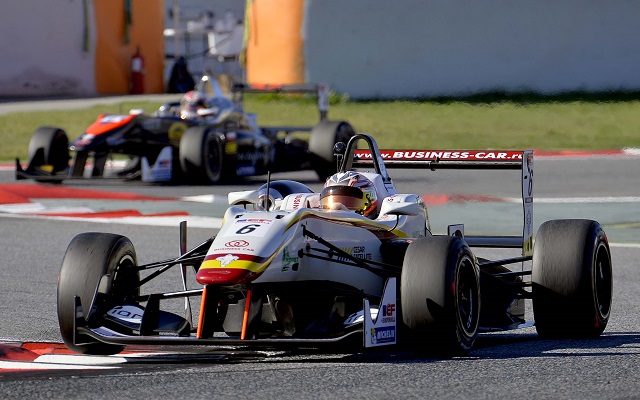 Konstantin Tereshchenko took his fifth victory of the season in race one at Cataluya and closed the championship gap to 21 points with one more race to go tomorrow.

The Russian had a great getaway to?stay in the lead at the start and quickly increased his lead to over a second from Yu Kanamaru, which he maintained until the checkered flag.

The only one to match Tereshchenko’s pace, Kanamaru made it home in second with Vitor Baptista completing the podium, having passed DTM driver Daniel Juncadella and Diego Menchaca off the line.

DAV’s Leonardo Pulcini ended up sixth followed by Yarin Stern, who came under pressure from West-Tec teammate Tanart Sathienthirakul and Damiano Fioravanti in the closing stages.

Wildcard entry Ferdinand Habsburg completed the top ten, having lost a spot to Fioravanti during the race.

With 27 points still up for grabs tomorrow, Tereshchenko remains in contention, albeit a top-four finish for Baptista will be sufficient for the Brazilian to secure the title tomorrow.