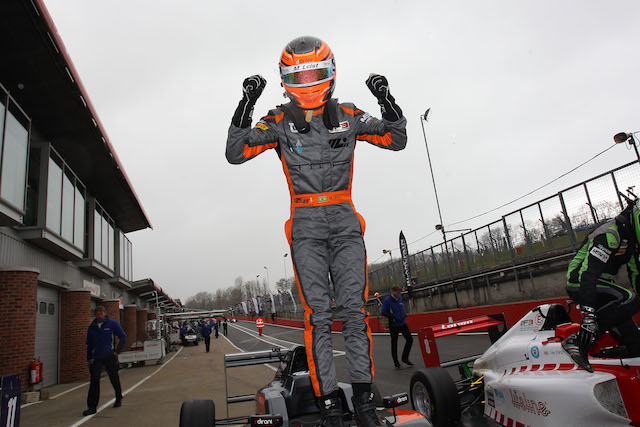 Matheus Leist scored his second win in BRDC British Formula 3 in the first race of round two at Brands Hatch.

The Brazilian Double R driver beat Carlin’s Ricky Collard to pole position and made a good start to hold the?lead.

For most of the race, Collard remained no more than half a second away from Leist, but the Brazilian eventually opened up a 1.7-second advantage in the closing laps as rain began to fall.

Third-placed?Toby Sowery also remained close to the leader throughout. He took P3 off the start away from returning HHC driver?Raoul Hyman, but the South African remained with the leaders and only lost fourth place on the very last lap after an off at Surtees in the rain.

Enaam Ahmed, the championship leader coming into the weekend,?spent a large part of the race in fifth before pulling off into retirement. That, combined with Lando Norris’ absence due to Formula Renault commitments, puts Sowery into the standings lead, two points ahead of Leist.

Ahmed’s exit promoted?Sisa Ngebulana to fifth, but he followed his team-mate and compatriot Hyman off at Surtees when he arrived on the scene some 14 seconds later. That put Ameya Vaidyanathan on course for fourth, only for the Indian?to end up in the gravel at the final corner.

Thomas Randle therefore came through to fourth from ninth on the grid, ahead of Fortec pair Tarun Reddy and Al Faisal Al Zubair. Hyman made it home seventh in front of Enzo Bortoleto and Thomas Maxwell, while Norris stand-in Colton Herta took 10th after a qualifying off?left him at the back of the grid.