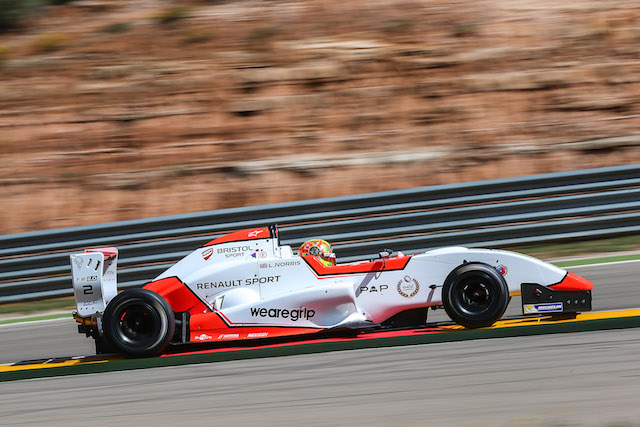 Norris got a better start than pole-sitter Defourny, and was able to use the inside line at Turn 1 to claim the lead. Defourny would lose second to Dorian Boccolacci at the same place a few laps the later, the Tech 1 driver going around the outside of the R-ace GP man.

Norris was prevented from escaping by a mid-race safety car to deal with a tangle at the hairpin between Fortec team-mates and compatriots Vasily Romanov and Nikita Troitskiy.

Further complicating matters after the restart was light rain that made the hairpin in particular quite slippery, with a number of drivers running deep on one lap including Defourny, who lost third to Harrison Scott.

Despite admitting to a mistake at the same corner himself, Norris remained out front, winning by 1.6 seconds from Boccolacci.

With Gabriel Aubry and Robert Shwartzman others to run deep?at the hairpin, Jehan Daruvala came through to finish fifth behind Scott and Defourny. Will Palmer had a much better second race to rise?to sixth ahead of Ferdinand Habsburg and Shwartzman, with Aubry completing the top 10 behind Henrique Chaves.

There was a nasty tangle further down the order on the final lap when Sacha Fenestraz, having been run wide exiting the hairpin, tagged Nerses Isaakyan at the next right-hander when he rejoined and sent the AVF driver upside down before he landed on his wheels again and got out?unharmed.