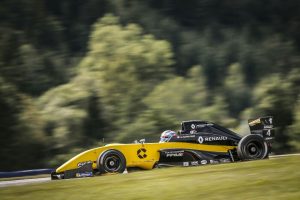 The race winning move came at Les Combes, and Martins was able to break the?tow to Sargeant as the American battled with Ye for second place.

Sargeant managed to just hold on to make it a R-ace GP 1-2, finishing less than half a second ahead of Ye.

Christian Lundgaard, who had taken the championship lead by a single point with victory in race one, started third but found himself on the wrong side of the slipstream and slipped down the order to finish eighth.

He dropped to fourth on the first lap, then spent the first half of the race battling with JD Motorsport’s Thomas Maxwell.

Maxwell eventually managed to break the tow to Lundgaard, with the MP Motorsport driver coming under pressure from behind.

Rougier was next to get past in a move that took two drivers at once, with Colombo and then Fewtrell finding a way through.

Colombo beat Rougier to fifth, and with Fewtrell relegating Lundgaard to eighth, it means Ye now leads the standings by 10 points.

Drama hit the first corner of the race when Arden team-mates Sami Taoufik and Nikita Volegov came together. Volegov barrel-rolled into the run off area, but his car landed the right side up and he was able to get out without assistance.

The incident brought out the safety car, which prompted more disappointment for Neil Verhagen, who was handed a drive through penalty for not respecting the safety car procedure.

On the final corner of the race Raul Guzman and Alexander Smolyar collided, leading to Guzman trundling slowly to the finish line down in 23rd place.

Douried Ghattas and Gabriel Gandula finished 20th and 21st, and are now second and third in the standings. Logan Sargeant has dropped to fourth as a result of being entered for Eurocup points at Spa-Francorchamps instead.