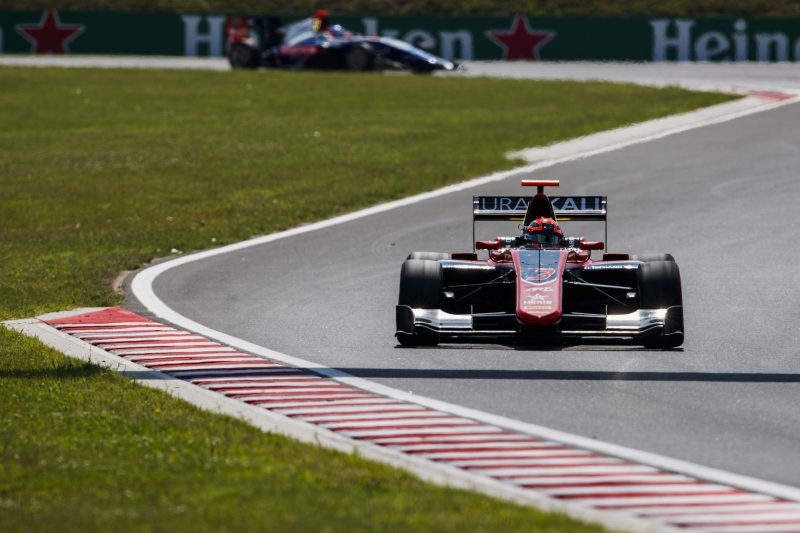 Nikita Mazepin led every of the GP3 feature race at the Hungaroring, taking advantage of a slow start from ART Grand Prix team-mate Anthoine Hubert.

Polesitter and championship leader Hubert bogged down at the start of the 22-lap race, falling back to third. Launching well from second on the grid, Mazepin grabbed the lead instantly. He eventually claimed victory by 10 seconds.

Leonardo Pulcini finished second after also passing Hubert at the start. He was 0.7 seconds faster than Mazepin on one lap at the halfway mark in the race but was unable to challenge the race leader.

Hubert’s poor start only restricted him to third, meaning he still extends his championship lead.

Behind the top three, ART’s Jake Hughes shaped the midfield battle. He struggled for pace and while new Trident signing David Beckmann was able to pass on the inside at the hairpin Turn 1, Arden International’s Joey Mawson spent several laps behind Hughes at the front of a train of cars.

With the prospect of overtaking made more challenging by a technical fault which meant that drivers did not have access to DRS during the race, Mawson twice attempted to pass Hughes around the outside at Turn 1.

On the second attempt, the two made contact. Mawson was forced to retire one corner later after sustaining a puncture, while Hughes had to pit for a new front wing and dropped to the rear of the field.

Beckmann pulled away from Hughes quickly and passed ART’s Callum Ilott for fourth place in the closing stages after Ilott ran onto the damp astroturf?on the exit of the final corner.

Ilott also lost fifth place on the last lap of the race to Ryan Tveter. The Trident driver was directly behind the Hughes and Mawson squabble and demonstrated rapid pace once in clear air to close in on title contender Ilott.

MP Motorsport’s Dorian Boccolacci will start the sprint race race from pole position after finishing in eighth place. He had to defend from Campos’s Diego Menchaca in the final laps of the race, with the pair finishing just 0.4s apart.

Gabriel Aubry scored the final point in 10th. He benefitted from a late race clash between Niko Kari and Pedro Piquet at Turn 2. MP Motorsport driver Kari aggressively defended 10th place and after being wrong-footed in the braking zone, Piquet tagged the rear of his?car. Kari retired with a puncture while Piquet broke his front wing and limped across the line in 12th.