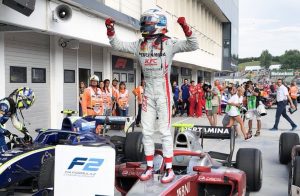 Nyck de Vries took a stunning second Formula 2 win of the season in a wet-to-dry race at the Hungaroring.

The first two thirds of the race looked like it would produce a Carlin victory for either Lando Norris or Sergio Sette Camara.

Sette Camara started from pole and looked comfortable up front, as Norris carved his way through from midfield after a poor start from sixth.

Using alternative lines to find grip that often included kerbs, Norris was often the quickest driver on track, and completed moves that started at the last corner and finished on the exit of Turn 2 on Antonio Fuoco and Jack Aitken on successive laps.

By lap six of 34 he was into third, and rapidly closed in on second placed de Vries. It took a further two laps to demote the Dutchman, doing so shortly after Turn 6/7 chicane, and immediately started to reduce his team-mate’s lead.

Sette Camara had used up his tyres up front, and could only keep Norris at bay for half a lap before conceding the lead of the race. By the end of that lap Norris had an advantage of 1.4 seconds, and he started setting fastest laps on his wet tyres as the track dried out.

Norris extended his lead by three seconds on the next lap, by which time Prema driver de Vries had caught up with Camara. The Dutchman took second place with a daring move at Turn 4, and was followed through by Fuoco a corner later.

The ‘alternative’ line was also in use by Fuoco, who was stronger in the first sector and found himself attacking de Vries between Turns 5 and 6 on several laps. Their battling assisted Norris up front, and when the McLaren junior pitted for dry tyres he came out in third place.

De Vries pitted on the same lap, having been overtaken by Fuoco seconds before, with the Charouz Racing System driver choosing to remain out for another lap.

This proved to be the wrong decision, with the Italian’s car squirming throughout his short stint in the lead and putting him back behind de Vries and Camara when he did choose to pit.

Camara almost ploughed into the rear of Fuoco as he exited the pitlane, but just managed to avoid him and benefited from the Italian being on colder tyres to take third place.

Norris’s lead over de Vries stood at 13 seconds once both of them had their tyres warmed up, and although Norris continuously set fastest laps, de Vries would better them when he crossed the line.

The lead shrank fast, with an exceptionally strong first sector by de Vries often gaining him eight tenths of a second or more on Norris.

It turned out Norris had burnt through his front tyres shortly after stopping, a problem particularly potent at the corner-heavy Hungaroring, and de Vries had cut down the lead by 10 seconds after just five laps.

Two laps later de Vries was on the leader’s gearbox, and a slight misjudgement at the exit of the Turn 6/7 chicane enabled de Vries to get the power down early and take the lead on the short straight before the next corner.

He was two seconds ahead by the end of that lap, and in the last six laps he added on another 14.5s despite the appearance of a Virtual Safety Car and a celebratory weave down the pit straight on the last lap.

In the closing laps Norris came under pressure from team-mate Sette Camara, and a failed move by the latter at Turn 1 on the last lap allowed Fuoco through into third. The three ran nose-to-tail for the rest of the lap, and some clever defending from Norris at the penultimate corner handed Sette Camara an opportunity to claim the last podium position.

The Brazilian misjudged his chance, punting Fuoco into a spin and earning himself a 20-second penalty. Fuoco miraculously got his car turned round and took third, having started in 12th place.

Japanese drivers Tadasuke Makino and Nirei Fukuzumi completed the points, at the expense of Roberto Merhi who had started last and run as high as fifth.