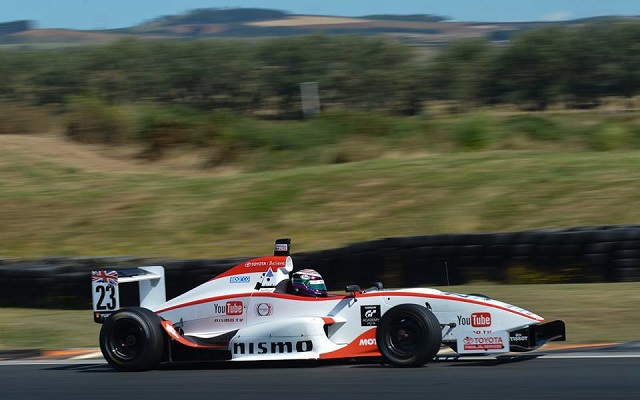 Giles Motorsport’s Jann Mardenborough has taken over the Toyota Racing Series standings lead after putting in an impeccable performance in the opening race of the penultimate round at Hampton Downs.

The Brit led every lap of the race from pole position and, despite two safety car periods, seemed in no real danger of losing the win.

Mardenborough’s title ambitions will have been bolstered by Martin Rump‘s struggles, as the previous championship leader brought out the safety car after going off on the opening lap.

At the front, it was Neale’s Andrew Tang who came closest to challenging Mardenborough, but the Singaporean had to settle for second, as Egor Orudzhev took third, strengthening his own title hopes.

Steijn Schothorst had an early moment while chasing after Tang but recovered to fourth at the flag, overtaking Matt Rao with two laps to go. The British driver held on to fifth, recording his best finish of the season.

Damon Leitch picked up solid points in sixth, ahead of Robin Hansson and title outsider James Munro. Russian duo of Denis Korneev and Matevos Isaakyan rounded out the top ten.

UPDATE: Egor Orudzhev has lost his podium finish as a result of a post-race time penalty. The Russian was adjudged to have gained an unfair advantage during one of the safety car restarts, when he overtook Damon Leitch before the start-finish line. The penalty sees Steijn Schothorst promoted to third.

Michael Scott has also received additional time due to a false start, which will see him drop from P16 to P18. Finally, Martin Kodric was m0ved behind Martin Rump in the classification, having punted the Estonian off on the opening lap.

UPDATE #2: Orudzhev has been reinstated to P3 after his penalty was overturned by the stewards. The reversal of the penalty also means the Russian will get to start race two from the front row.