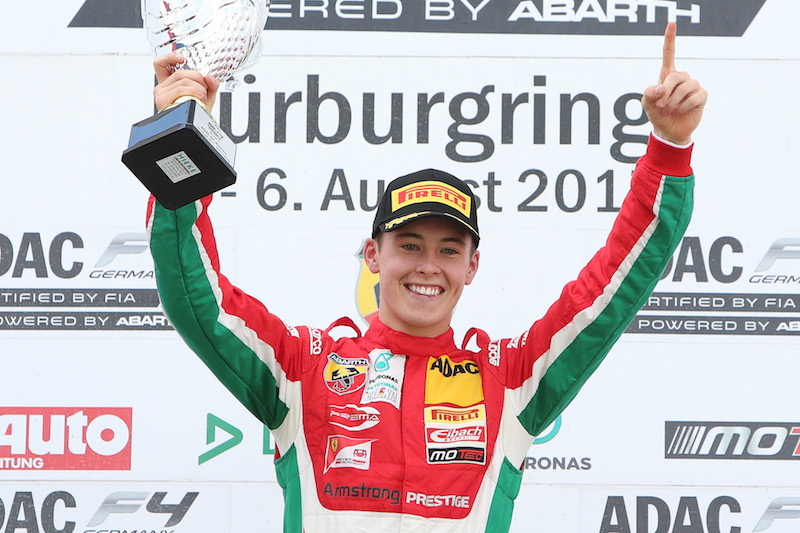 Ferrari protege and Italian Formula 4 champion Marcus Armstrong will step up to the Formula 3 European Championship with Prema in 2018.

The New Zealander was signed to the Ferrari Driver Academy 12 months ago ahead of his first full season in single-seaters, where he claimed the Italian F4 title and came a close second to Prema team-mate Juri Vips in the German series.

He also won three races in his native Toyota Racing Series,?where he will return in January before embarking on his rookie F3 campaign.

“I?m thrilled to work with Prema in Formula 3, especially after all the success we enjoyed this year in F4,” he said.

“I know everyone well within Prema and I feel privileged to work alongside such an experienced bunch of guys.

“From my first laps in F3 I really enjoyed the car. After this December I hope to understand it well so we can hit the ground running in 2018.”

He is Prema’s first confirmed driver for the 2018 European F3 series.

“We are thrilled to join forces with Marcus again for his Formula 3 debut,” said team boss Rene Rosin.

“He really put up a brilliant display in his first full-time season in European single seaters and I can?t wait to see him back on-track in Formula 3.

“He will need to step up to meet the needs of such a challenging series but I?m confident he will be absolutely up for it considering how impressive he was this season and how he kept up with his professional improvement.

“Our Formula 3 line-up is? coming together nicely and we are looking forward to the winter with confidence.”

Armstrong’s new FDA stable-mate Robert Shwartzman has been tipped to race for Prema next season, while Mick Schumacher is set to remain with the team for another year.