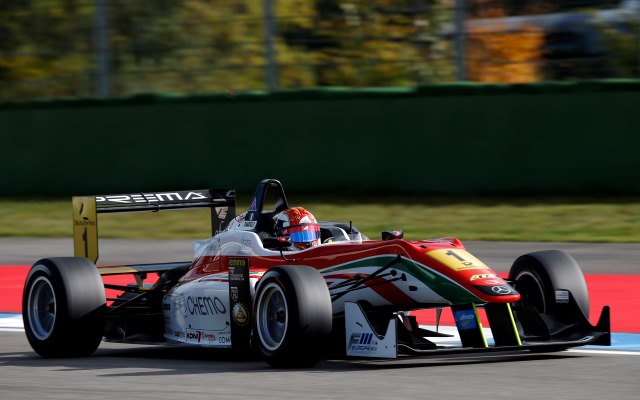 Marciello – who holds a 45.5 point lead over Rosenqvist with 75 available in the three races – claimed top spot for race one and race three as a result of setting the pace in both segments of qualifying.

The Ferrari protege posted a 1m33.778s in the first session, nine hundredths of a second faster than his Swedish rival. Marciello then managed to lower his time to 1m33.495, with Rosenqvist again only narrowly missing out, this time by 0.068s.

Mucke Motorsport driver Rosenqvist was rewarded for his pace with pole for race two courtesy of having the best second-quickest time from the first session. Marciello will join him on the front.

Behind the two title contenders, Harry Tincknell secured third on the grid for both race one and race three.

Prema pair Alex Lynn and Lucas Auer will start fourth and fifth respectively in race one, with Van Amersfoort Racing duo Sven Muller and Dennis van de Laar keeping up their pace from practice to take sixth and seventh. Antonio Giovinazzi was eighth ahead of Kevin Korjus, making his series debut with T-Sport in order to qualify for Macau. Jordan King completed the top ten for the first session.

Lynn claimed third on the grid for race two ahead of Tincknell, with Auer, Giovinazzi, Muller, King, van de Laar and Korjus the order of the rest of the top ten.

Auer will start fourth in race three ahead of King and Nick Cassidy, who took an impressive sixth on his second appearance of the year. Giovinazzi completed a fine set of grid positions with seventh, ahead of Felix Serralles, Tom Blomqvist and?Eddie Cheever.

Lynn languished all the way down in 20th in the second session but will still be ahead of F3 returnee Stefano Coletti who will start 28th and last for the third race. He will be 24th and 25th in the earlier two races.