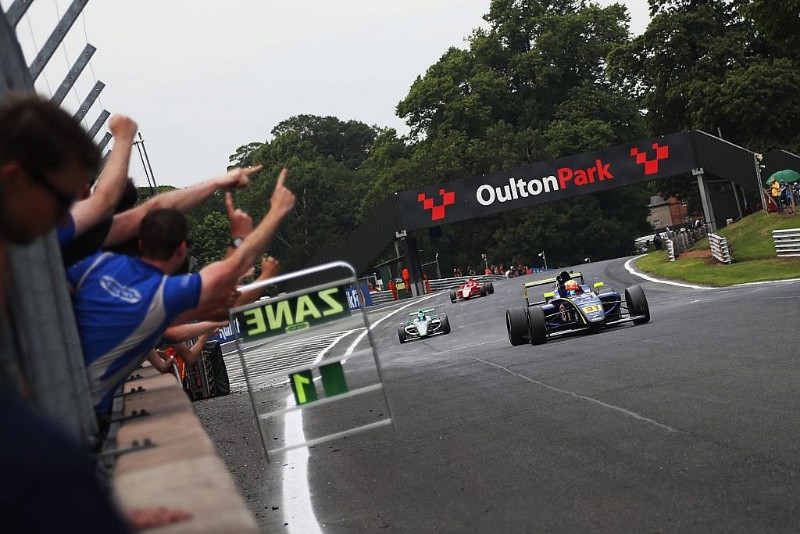 Maloney took advantage of drama ahead to come from sixth on the grid to win the reverse grid race by 2.980 seconds from Carlin team-mate Joe Turney.

Foster?s team-mate Alvarez got a poor start from second on the grid, with second-row starters Turney and Bart Horsten drawing alongside him. The three cars touched at the first corner, resulting in Arden driver Horsten and Alvarez spinning to the back of the field and Turney dropping to fourth.

The collision enabled Foster to pull out a 2.5s lead after the first lap from JHR Developments? Carter Williams, who made up five places in the first-lap melee.

But on the fourth lap Foster briefly slowed with a gear selector issue, and Maloney capitalised to take the lead from Williams, with Foster dropping to sixth.?Williams ended up taking his second British F4 podium in third.

A close fight developed for fourth place in the last couple of laps, with Tommy Foster holding on to the position for Arden, finishing just 0.281s ahead of Luke Browning – the Richardson Racing driver coming from the back of the grid after an issue in race one to take fifth. ?

Despite his earlier issue, Louis Foster finished just behind the pair in sixth after a late overtake on Arden’s Alex Connor.

Horsten (Arden) and Alvarez recovered from their first corner incident to score points in eighth and ninth.