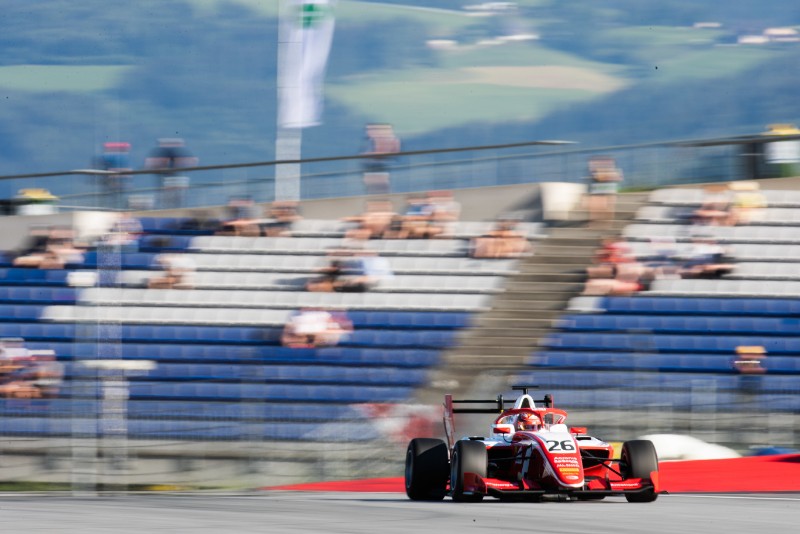 Marcus Armstrong found it “a lot more difficult to overtake than I expected” in the FIA Formula 3 feature race at the Red Bull Ring after losing the lead from pole.

The Prema driver was passed into Turn 1 on the opening lap by ART Grand Prix’s Max Fewtrell, but Armstrong did manage to reclaim the lead two corners later. Once race winner Fewtrell got back through, following Hitech GP’s Juri Vips, Armstrong was unable to respond.

He ended up then coming under pressure from team-mate Jehan Daruvala, but managed to hold onto third place.

“It was always a strategy to come strong at the end. Yesterday we had very good pace, [so] after the first lap when I did pull a gap from Max I took it very easy,” said Armstrong.

“Arguably too easy. After Juri and Max got me in the same move I saw how hard Max was pushing.”

Armstrong said after qualifying that he expected the race to be “similar to the Indy 500” because of the strong DRS effect, but in reality the race was limited in overtaking.

“I was actually pretty confident that we would come back at the end. Long story short, it was a lot more difficult to overtake than I expected, just because Max was sitting in Juri’s DRS and he wasn’t making any mistakes.

“[Third] is good points for the championship because I’d much rather finish here than do some spectacular move and then shunt and not take any points. All in all it’s not a bad day and we’re not in a bad position for tomorrow.”

Armstrong has fell to fourth in the standings, although has decreased the gap to championship-leading team-mate Robert Shwartzman down to 26 points.

Shwartzman started the race back in ninth after his car stopped on track in qualifying, and he rose up to finish fifth in a similarly difficult race.

“It was really hard to overtake because everybody had DRS so it was like a big train and if somebody is not making mistakes, you can’t do much,” he said.

“I was faster in the corners but at the exit for the straight, they were just pulling a little bit.”