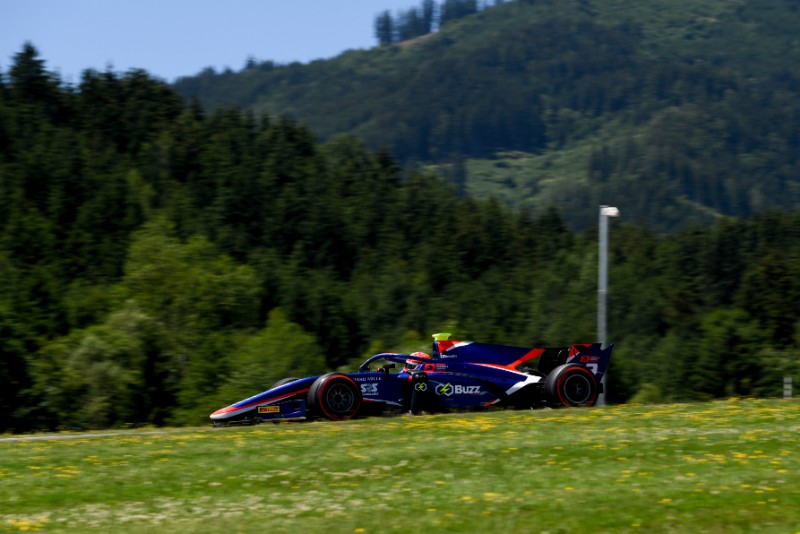 De Vries led from pole position and appeared to be comfortably on his way to a third straight feature race victory as he carved through those who went longer on the alternate tyre strategy.

He began to struggle with tyre wear however, and although he easily took the lead on the road back from long-stinting ART Grand Prix team-mate Nikita Mazepin with seven laps to go, both Matsushita and Luca Ghiotto also got by within a lap.

A lap later, Matsushita snatched the lead from de Vries down the inside of Turn 1.

Ghiotto also passed de Vries later in the lap and was at that stage within a second of Matsushita, but the Honda-backed driver pulled away to win by 2.9 seconds, taking?Carlin’s first F2 win since Lando Norris won the 2018 season opener in Bahrain.

Sergio Sette Camara also overtook Nyck de Vries on the final lap to finish third on the road, but dropped to fifth in the results due to a five-second penalty for punting his DAMS team-mate Nicholas Latifi into a spin at Turn 3 on lap six.

Third is therefore enough for de Vries to increase his championship lead to 29 points over Latifi, who ended the race ninth after dropping towards the rear of the pack.

Rookies Anthoine Hubert and Guanyu Zhou battled for second into Turn 3 on the first lap after their strong qualifying results, with Zhou forced wide as he went side-by-side with his Renault Sport Academy stable-mate.

Hubert was eventually passed by Matsushita, Zhou and Ghiotto, but finished just 0.3s behind the ailing de Vries for his best feature race result to date.

Zhou slowed out of the final corner on lap eight with a gearbox glitch that dropped him to ninth among the early stoppers, but recovered to finish sixth between Sette Camara and Deletraz – the latter also picking up a five-second penalty, in this case for speeding in the pit lane.

From 15th on the grid, Jordan King held off Latifi by 0.8s for eighth place and reversed grid pole. Jack Aitken took the final point with a strong finish to the race, after a clutch issue caused a slow getaway from 14th.

Callum Ilott at one stage passed Deletraz on the track but fell back to 14th at the flag. Arjun Maini was 15th on his return with debutant Ryan Tveter 16th.

The other newcomer Patricio O’Ward struggled as a long stint on the soft tyre wore on and ended up 20th and last behind Mick Schumacher, who stalled at the start of the formation lap but showed strong race pace, unlapping himself against de Vries.