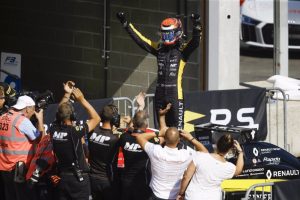 Christian Lundgaard moved into the Eurocup Formula Renault championship lead with his second victory of the season at Spa-Francorchamps in a race that ended behind the safety car.

The MP Motorsport driver had managed to build a gap to the rest of the field after battling with Arden’s Oscar Piastri in the early stages of the race.

His victory came under threat when Sharon Scolari span into the barriers five minutes before the chequered flag, bringing out the safety car. Ye Yifei, running second, had no chance to challenge for the lead, with the race coming to an end under safety car conditions.

Lundgaard spent the opening lap swapping positions with Piastri and poleman Lorenzo Colombo of JD Motorsport, before the latter dropped down the order.

A wide moment for Piastri allowed Ye to snatch second, but the Arden driver bounced back, reclaiming the position on the run to La Source.

The pair continued to battle, allowing Lundgaard to pull away at the front of the order, and Fortec Motorsport’s Arthur Rougier to close onto the back of the battle.

Ye managed to retake second before the safety car neutralised the field, but it wasn?t enough to retain the title lead, with Lundgaard sneaking ahead by a single point.

Piastri completed the podium ahead of Rougier, Max Fewtrell and Colombo.

Thomas Maxwell and Richard Verschoor took seventh and eighth, with Logan Sargeant and Charles Milesi rounding out the top 10.