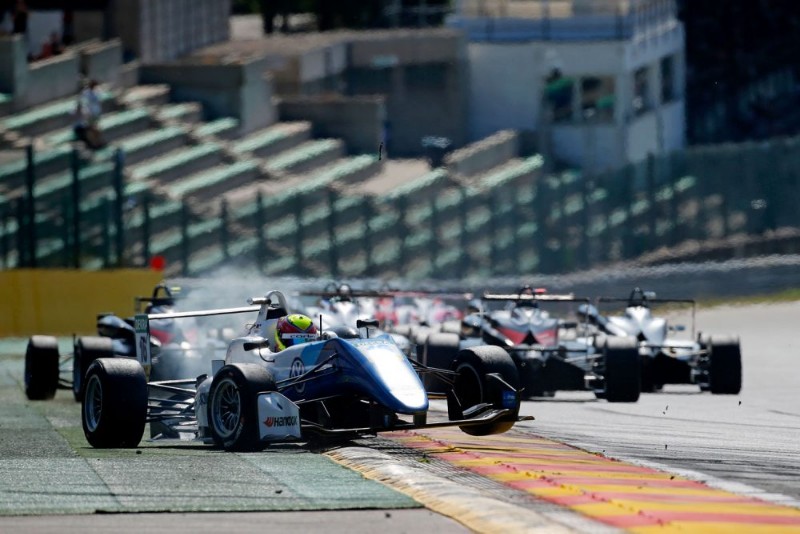 European Formula 3 championship leader Dan Ticktum has been penalised for a incident involving Nikita Troitskiy in the opening Spa-Francorchamps race, reducing his lead to 1.5 points over Ralf Aron.

At the start of the first race, 13th placed starter Ticktum cut across the inside of La Source to avoid colliding with the slow starting Troitskiy.

Contact was made regardless, and Troitskiy was pitched into Carlin team-mate Sacha Fenestraz.

Ticktum continued undamaged, and he finished the race fourth. The Motopark driver has since been penalised though, with stewards describing how “car #27 [Ticktum] was on the inside of Turn 1. He went outside the white line on the inside of Turn 1 with all four wheels and lost control of the car. He caused a collision with car #16 [Troitskiy] by his unsafe rejoin.”

A 20-second penalty, rather than the drive-through that would’ve been handed out during a race, drops Ticktum down to 13th place, cutting his championship lead gained in the second race down by 12 points.

Troitskiy ended his race on the spot with damaged suspension, while Fenestraz pitted with a puncture and eventually finished 11th. With Ticktum’s penalty, he now moves up to 10th and the final points place.

Ticktum’s team-mate Juri Vips has also been penalised, this time a five-place grid penalty for the third race of the weekend, for colliding with fellow Estonian Aron while fighting over the lead in the second race.

Vips misjudged how little space was between himself and Prema driver Aron as they went down the Kemmel Straight, and after touching wheels they both span off and out of the race.