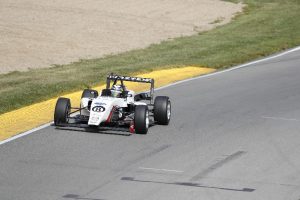 Kyle Kirkwood clinched the 2018 USF2000 crown with four races to go with victory in the first race at Mid-Ohio.

The Cape Motorsports driver started from pole, his fourth of the season, and dominated to take his seventh consecutive win.

Kaylen Frederick and Rasmus Lindh, who had qualified second and third, collided into Turn 4. Frederick pitted and lost a lap, while Lindh was handed a drive-through penalty.

Pabst team-mates Lucas Kohl and Calvin Ming moved into second and third as a result, while a bold overtake by BN Racing’s Keith Donegan moved him into fourth.

A set of full-course cautions kept the podium order unchanged, while a mishandling car moved Donegan down to fifth behind championship debutant James Raven.

Raven was judged to have jumped one of the restarts though, and was handed a drive-through penalty, dropping him to 18th.

Dakota Dickerson benefited from the chaos to rise from 24th on the grid to sixth, ahead of Singaporean Danial Frost.