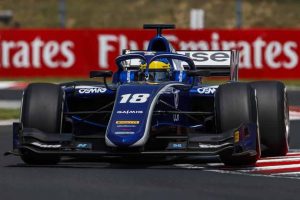 The Carlin driver set a lap time of 1m27.400s on his final lap, beating ART Grand Prix’s Jack Aitken by just 0.030s, having not been in the battle for pole position for the majority of the qualifying session.

Sette Camara is currently sixth in the drivers’ championship, despite being absent from both races in Monaco due to injury.

Aitken and his championship leading team-mate George Russell topped the times at the beginning of the session, with not much changing in the order during the opening half of qualifying.

That changed when Nyck de Vries went fastest half-way into the session with a 1m27.631s lap that was particularly strong in the first two sectors. He ended the session in third.

With nine minutes to go Aitken went two tenths of a second faster and looked the most likely to claim pole position until Sette Camara’s final second effort.

Russell was close to going faster on his final lap with six minutes to go, claiming the best second sector time at that point in the session, but wasn’t able to make anymore time up. The British driver will start the feature race in fourth.

Behind him on the third row of the grid will be Luca Ghiotto, who set his fastest lap a few seconds before Aitken, and Sette Camara’s Carlin team-mate Lando Norris.

Artem Markelov made use of a quiet period on the track before De Vries’ lap time to go fifth fastest at the time, which was good enough in the end for seventh. Arjun Maini will start alongside him for Trident.

The fifth row of the grid was completed by MP Motorsport’s Ralph Boschung and Charouz’s Louis Deletraz.

Alessio Lorandi was 17th fastest on his F2 debut for Trident, replacing the banned Santino Ferrucci.