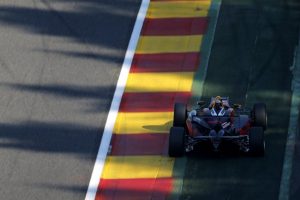 Dan Ticktum led a Motopark 1-2 in the second Formula 3 European Championship race at Spa-Francorchamps, launching himself into the championship lead in the process.

Starting from 10th on the grid, Ticktum made use of the slipstream effect on the Kemmel Straight and incidents on the opening few laps to be a contender for the race victory.

Fabio Scherer, Ticktum’s Swiss team-mate and three places ahead of his team-mate on the grid, was gifted the lead of the race after Estonians Juri Vips and Ralf Aron collided several laps in going into Les Combes.

Ticktum and Scherer then fought for the rest of the race, exchanging the lead on the Kemmel Straight on multiple occasions.

After taking the lead again with nine minutes to go, Ticktum held off his team-mate as the Carlin’s race one winner Jehan Daruvala caught up to them.

Ticktum won the race with a 1.483 second gap to Scherer, who had to hold off Daruvala on the last lap to keep second place.

Along with the collision between Vips and Aron, poleman Mick Schumacher and his Prema team-mate Guan Yu Zhou made contact at the start of the race entering Turn 1. Zhou damaging his front wing and Schumacher picked up a tyre puncture from the contact, and the pair came into the pits to retire at the end of the first lap.

Robert Shwartzman was the highest placed Prema driver when the chequered flag fell having moved up from eighth at the start to fourth. Marcus Armstrong was not too far behind him in sixth, but had to hold off Carlin’s Sacha Fenestraz on the final lap.

The Prema duo were separated by Hitech GP’s Enaam Ahmed in fifth, moving him back past team-mate Alex Palou in the standings.

Fenestraz’s?team-mate Nikita Troitskiy was running in the top five during the race, making his way past Shwartzman?for fourth place with four minutes to go. However the Carlin driver fell down to eighth position during the final two laps.

Behind him Motopark’s Jonathan Aberdein finished in ninth with fastest lap, while Ferdinand Habsburg completed the points paying positions.