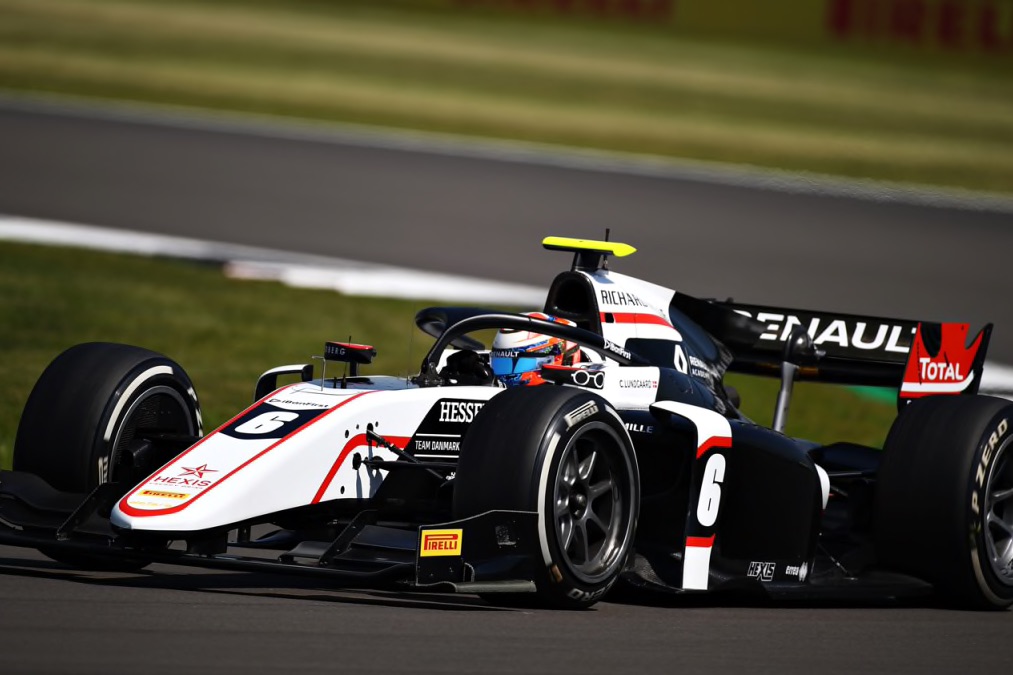 Christian Lundgaard says he thought that the tyre issues that some Formula 1 teams ran into at Silverstone might also affect him during the Formula 2 feature race.

ART Grand Prix driver Lundgaard was running in second behind Virtuosi Racing’s Callum Ilott in the feature race, but his front-left hard-compound tyre was showing signs of strain towards the conclusion of the race.

Towards the conclusion of the British Grand Prix last weekend, Mercedes pair Lewis Hamilton and Valtteri Bottas, as well as McLaren’s Carlos Sainz Jr, all suffered front-left tyre failures resulting from the high demands of the fast Silverstone layout.

After suffering from vibrations during the race, Lundgaard admitted that those events were on his mind.

“It definitely didn’t feel great,” Lundgaard said in his post-race television interview. “I don’t think it looked great either so I was a bit worried at some point because I got a lot of vibrations and looking at F1 last weekend, they ended up with tyre failures. So I was a little bit worried about that at some point but I got it back home.”

Lundgaard expanded on this in the subsequent press conference and said that the vibration made him feel dizzy as the situation worsened.

“It’s a bit the same as in last week in race one where you have a period of graining and then once that disappears the grip kind of comes back, but it’s like I never finished the graining phase today, I just started pushing harder on it, and in the end, the tyre was there.

“But I don’t think that we should have done many more laps [otherwise] it would have been a bigger problem. At the moment I don’t think it was that big a problem, but in the last 10 laps we had a hell of a lot of vibrations. I kind of got dizzy down the straights.

“Obviously looking at F1 from last week it crosses your mind, but to be honest I didn’t feel that the front-left was giving up so I thought ‘OK, at the moment it all feels fine’.

“That’s what the [F1] drivers said as well. I wouldn’t say I thought it was going to happen but obviously it crossed my mind that this can happen because we’ve seen it happen.”

After saying after qualifying that he had written down predictions on his leg, Lundgaard conceded that his prediction “didn’t match up” today.

“Where Callum is sitting [in first place],” he said when asked what his prediction was for the race

“Looking at last week we kind of expected it. I maybe thought that we would have caught up a bit more. We knew Callum was quick from last week, starting from the pits and still finishing P5, [it was] quite impressive. I was surprised that [the gap] was that big.”