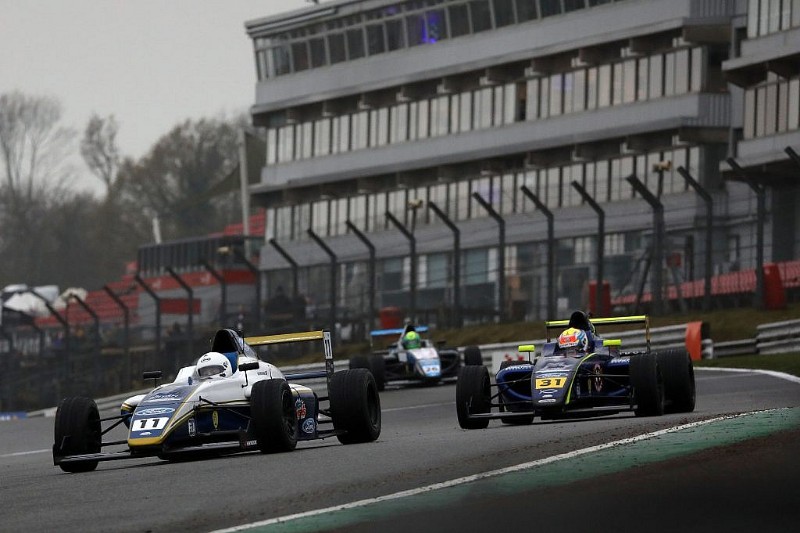 After Arden’s Bart Horsten crashed out and his own Carlin team-mate Joe Turney faded with tyre issues, Maloney found himself leading the race going into the final few laps. Race one winner Browning was in pursuit, and placed his car inside of Maloney’s at the final corner of the race.

As Maloney moved back to the inside of the track the pair made contact, with Maloney spinning down to seventh place. Browning won the race, but a penalty and subsequent appeal left him with 10 seconds added to the Richardson Racing driver’s race time.

“It was an awesome [race]. It?s great to have got two out of two,” Browning told Formula Scout before the penalty was awarded.

“Leading the championship, it?s just awesome to carry that momentum on. Next race should be an interesting one; starting from 10th. But we?ve done it before so there?s no reason why I can?t do it again.”

“He [Maloney] pinched me at the apex really,” said Browning of the last corner incident.

“I forced him to defend at Surtees, and I knew he?d be out of position going into the last corner. There was a gap there and I went for it. Sadly I don?t think he saw me.”

Maloney was less than pleased to lose what would’ve been victory in his second car race.

“The weekend?s been amazing, up to the last corner of the last lap,” he told Formula Scout.

“I did what I could. I don?t think I did much wrong in that race. I had it [the position] secured.?The wet bit was right next to me, and then he just – I don?t know what he was trying to really do.

“We had the pace for most of the race, and I saw him catching me. Because it was drying out I was trying to save the tyres a bit. Then he got close and I just defended where I had to. Every lap I defended the exact same [place] into the last corner.

“I?m guessing because it was last lap last corner, he thought ?we can?t come second?. Hopefully something happens with it, but it?s not really going to help me, so I?m just going to come back stronger in the next race.”

Foster struggled for pace early on in the race, but prevailed in a close battle with team-mate Alvarez for what ultimately became first place. The teenager was already “over the moon” finishing second, having been unable to extract the maximum performance from his car.