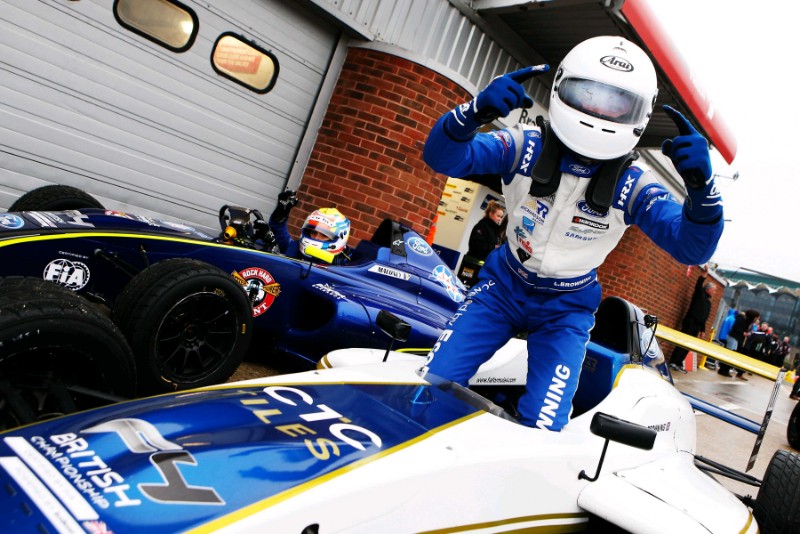 Richardson Racing’s Luke Browning made it two wins out of two in his British Formula 4 career at a murky Brands Hatch.

After dropping back from pole in the first race, Carlin’s Joe Turney ended up starting from the front again in the reversed grid race two, but instantly conceded positions to Arden’s Bart Horsten and Carlin team-mate Zane Maloney.

Both Hortsen and team-mate Tommy Foster ended up going off track early on, putting Turney back in the lead once he had passed Maloney down the inside of Clark Curve. At the same time, Browning was making progress up the order from sixth on the grid.

Horsten’s stricken car led to a brief safety car period, which brought Browning closer to those ahead and also briefly aided Turney’s victory hopes after he made an exemplary restart.

Turney had lost second before the end of the lap though, with Browning immediately on his tail. The move was made when Turney hit the kerbs on the outside of Paddock Hill Bend on lap 13, which not only allowed Browning through but meant Double R Racing’s Sebastian Alvarez could also barge past for third.

This broke Turney’s front wing, and when Louis Foster replicated Browning’s move on him, Josh Skelton tried doing the same as Alvarez but ended up punting Turney. The karting graduate saved the spin to keep it on track, while Skelton ended his own race with suspension damage.

Browning cut the deficit to the front in the remaining laps, and was close enough to challenge Maloney with two laps to go. His first attempt on lap 21 around the outside of Paddock Hill Bend proved unsuccessful, and he tried again along Pilgrims Drop on the final lap.

Maloney defended hard, but left enough space at Clearways for Browning to get down the inside for a ‘switchback’ move. The lack of grip on the outside meant Maloney couldn’t give Browning any extra space, and as he moved back onto the racing line the pair made contact and Maloney was spun round.

This left Browning to take his second successive victory, ahead of Double R team-mates Foster and Alvarez. The pair swapped places several times in the latter part of the race, and made contact several times, but ultimately fought cleanly enough to secure a double podium finish.

None of the drivers seemed to be aggrieved at the aggressive driving on track immediately afterwards, with Maloney describing it as “racing is racing” after crossing the line in seventh.

Turney was promoted back to fourth by the last lap drama, ahead of Roberto Faria (Fortec Motorsports) and Carter Williams (JHR). Double R’s Reema Juffali made history by scoring points in ninth place.