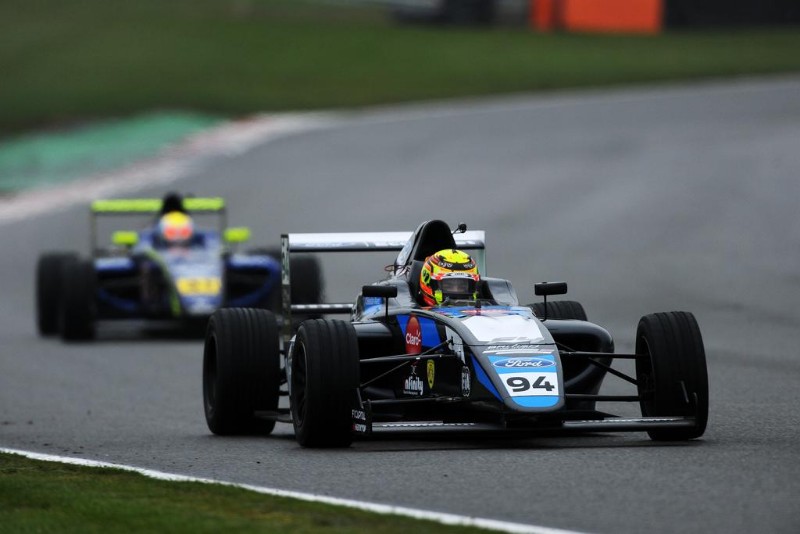 Sebastian Alvarez took an assured first British Formula 4 victory at Brands Hatch, moving into the championship lead in the process.

The Mexican had a best finish of sixth last year, and started off the 2019 season with two second places for Double R Racing. He took pole for the third race of the weekend, and held that position all the way to the chequered flag.

Carlin’s Zane Maloney, who lost a likely victory in race two to a clash with race one winner Luke Browning, was within a second of Alvarez for much of the race but could not close enough in the dry conditions to attempt a move. He finished 1.104s behind in second, meaning he missed out on the championship’s ?5000 prize for the first car racing rookie to win.

After a promising year in BRSCC National Formula Ford 1600, Carter Williams demonstrated he can perform in F4 by finishing third. It was JHR Developments’ first podium of the weekend, with team-mate Josh Skelton finishing a lap down after early contact with Joe Turney.

The unrelated Louis and Tommy Foser were fourth and fifth for Double R and Arden, a considerable distance ahead of the battling Bart Horsten and Browning, who is now 15 points behind Alvarez in the standings.

After his lap two clash with Skelton, Turney spent the race trying to keep his damaged car in eighth position ahead of Fortec Motorsports’ Roberto Faria. That plight proved successful right until lap 24 of 26, when the karting graduate went wide at Paddock Hill Bend and conceded the position.