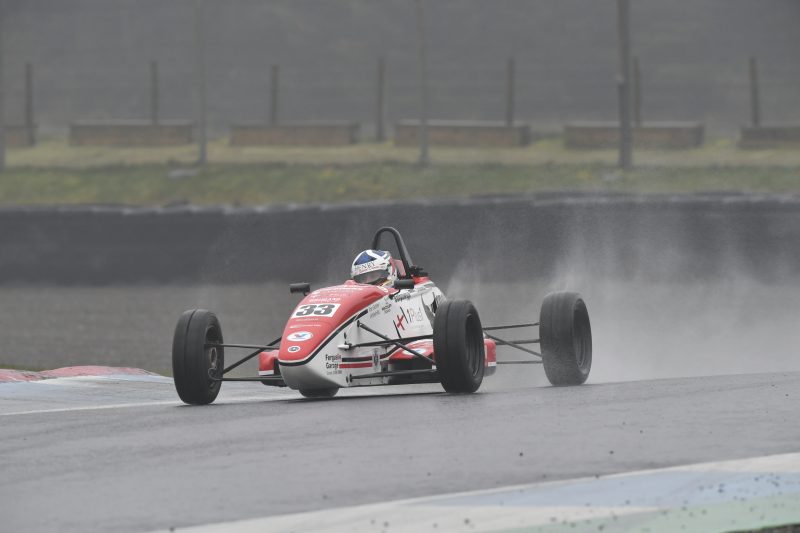 Jordan Gronkowski dominated the first Scottish Formula Ford round of the season, putting himself into the position of an early title favourite.

The family-run racer has finished third in the standings for the last two years of the Knockhill-based championship, and started his 2019 campaign by beating Border Reivers’ Jamie Thorburn to pole by almost a second.

Gronkowski was untouchable in the first race of the weekend, setting fastest lap after fastest lap to beat Thorburn by 8.55s.

Championship returnee Kenneth Cowie finished an anonymous third, way ahead of Neil Broome and a closely packed bunch of cars fighting for fifth to eighth place.

Karting graduate Cameron Thomson ended up heading that battle for Graham Brunton Racing, ahead of Matthew Chisholm and his GBR team-mates Logan Hannah and Steve Barlow.

Gronkowski lost the lead to Thorburn at the start of the second race, but once he reclaimed it with a skilled move around the outside of the hairpin was just as unchallenged as before, this time winning by 7.217s.

MCK Motorsport driver Cowie took another third place after an anonymous race, with Broome’s podium challenge ending after an understeery moment and ending up fourth ahead of Chisholm.

Chisholm spent much of the race battling with Young Racing Driver Academy member Hannah, with the latter initially holding the advantage. Two failed switchback moves occured in the first half of the race, and Hannah looked to be head until she slid off at the hairpin in the damp and got beached in the gravel.

This prevented any overtakes taking place at that corner thereon, and meant GBR had an uphill battle in salvaging a strong result.

Thomson stalled off the start line, and in a haste to catch team-mate Barlow spun at the hairpin three laps from home. He got on Barlow’s gearbox on the final lap but lost control again and span off. Barlow therefore took sixth, ahead of Thomson and Hannah, with the fourth GBR car of Reid retiring with mechanical issues.