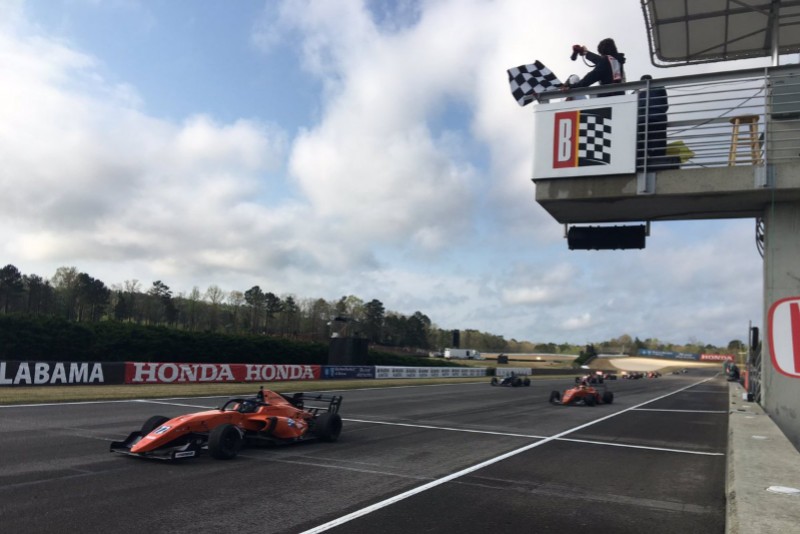 Global Racing Group duo Benjamin Pedersen and Dakota Dickerson left the first round of the Formula 3 Americas season at Barber Motorsports Park tied at the top of the standings.

The championship never had more than six cars on the grid for its inaugural season last year but attracted 13 for its first IndyCar-supporting 2019 round.

Pedersen was third in the standings in a part-season in 2018, simultaneously competing in United States Formula 4 where team-mate Dickerson won the title. The Dane took first blood at Barber, beating Velocity Racing Developments driver Mathias Soler-Obel and Dickerson to pole.

Pedersen led from pole, while Dickerson rose to second place while Soler-Obel slipped down to sixth. W Series driver Shea Holbrook crashed and caused a full course yellow on the opening lap.

Dickerson was unable to challenge his team-mate, with Pedersen taking the chequered flag first by over seven seconds. Jacob Abel, ran by his family-run team, completed the podium to take his equal-best result in the series.

The biggest battle of the race was for fourth place, with James Roe Jr emerging on top, ahead of GRG team-mate and 2018 runner-up Baltazar Leguizamon. Completing the top six was Canadian driver Logan Cusson.

Race two was declared wet, but by the time the race started the skies were blue and the track was drying. Dickerson took a lights-to-flag victory, with Pedersen finishing a close second.

The race was finished under full course yellow after Leguizamon spun his car off the track at Turn 5. At the flag, Kent Vaccaro took the final position on the podium ahead of Abel and Soler-Obel, who charged up to fifth on slick tyres and would’ve progressed further were it not for the FCY.