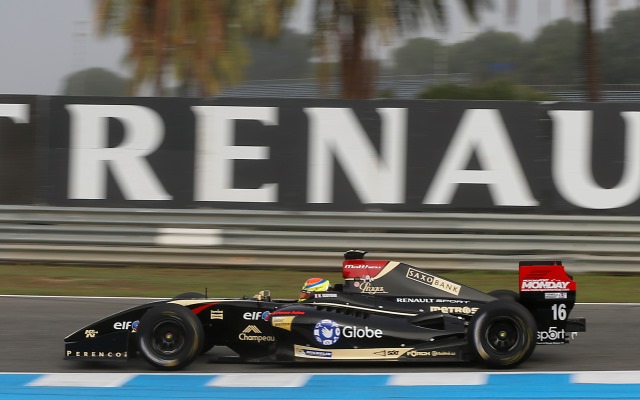 Lotus drivers Matthieu Vaxiviere and Nicholas Latifi finished first and second in the morning session on the second day of the Formula Renault 3.5 post-season test at Jerez.

Season finale podium finisher Latifi switched from Strakka to the Lotus team for Wednesday and was 0.382 seconds slower than the team’s regular driver Vaxiviere, who finished eighth in the 2014 standings as a rookie despite missing two rounds because of injury.

Tuesday pace-setter Pietro Fantin was third fastest for his regular team Draco ahead of another driver with two FR3.5 seasons under his best – Jazeman Jaafar. The Petronas-backed driver has joined the test for the second day, driving for Fortec.

Eurocup champion Nyck de Vries was the quickest rookie in P5 for DAMS ahead of F3 graduate Jordan King (Arden). Beitske Visser was seventh for AVF ahead of Fortec’s Luca Ghiotto.

Jake Hughes made his FR3.5 debut in the second Strakka car, completing a field of just 18 for the second day, with Comtec no longer in action after running Steijn Schothorst on Tuesday.