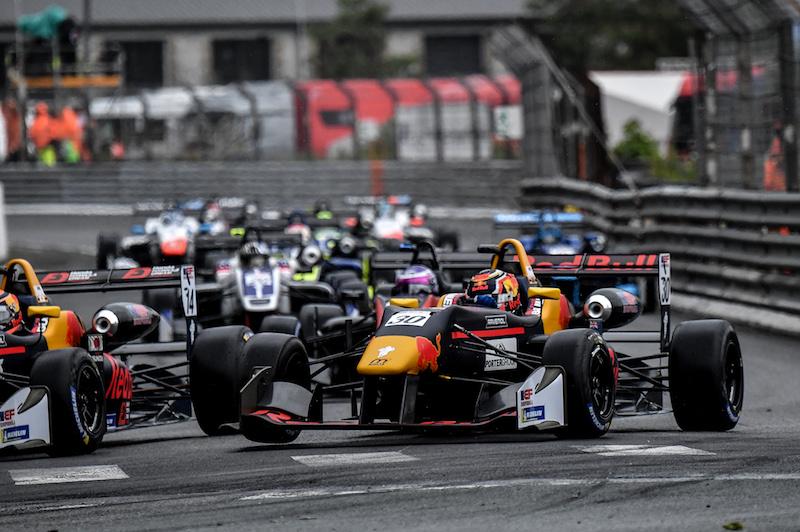 Liam Lawson has defended Motopark’s race strategy during a rain-affected Pau Grand Prix, after the team’s top-four lock-out on the grid yielded just one podium.

Polesitter Julian Hanses and his team-mates Yuki Tsunoda and Lawson raced into an early dominant lead in the first half of the race.

However, their race quickly unravelled, as Billy Monger – along with the other drivers who made the gamble to switch to wet tyres at the end of the formation lap – quickly made their way through the field and onto the back of the slick-shod trio.

Monger overtook Tsunoda, and was rapidly closing on the leading duo when they collided at the chicane. This handed Monger the race win, with both Lawson and his team-mate Hanses eliminated from the race.

The decision by Monger to switch to the wet tyres proved to be the superior strategy, but Lawson believes the Motopark drivers had no choice but to stick on dry tyres during the race.

“If we’d stopped early, we would have lost too much time, because there wasn’t that much pace difference [between dry and wet tyres],” Lawson explained to Formula Scout. “A pit stop would have taken such a long time that it wouldn’t have made it [easier].

“The only reason the other guys could be quicker on the wets was because we caused the safety car and they could pit without losing time basically. There was nothing we could do. The front four cars, we had to make a decision. And at the time it was the right decision.”

Motopark boss Timo Rumpfkeil echoed his driver’s thoughts, suggesting it would have been a ‘bold move’ to sacrifice the top-four lock-out by pitting for wet tyres and falling behind those who had already pitted.

“First of all, I think when you start 1-2-3-4, it really would?ve been a very bold move to call them in to pit early for wets,” Rumpfkeil said.

“Also for quite a long time, the lap times were equal between the wets and the slicks, so we thought we could hang around.

“Or the initial plan was to stick with it unless there was a safety car, and I think third, fourth, fifth would still be possible. Because at that time it was only Billy, [Nicolai] Kjaergaard and [Aldo] Festante who were quite close. The others lost quite a lot of time because they pitted under green.

“We called in [Marino] Sato but there was quite a poor pitstop from us. It took time and we called him in under green. As the safety car came, we pitted with Yuki and put him on wets. One lap more and the race probably would?ve ended differently.

“Not the result we wanted, but this place also pulls its own kind of stories.”