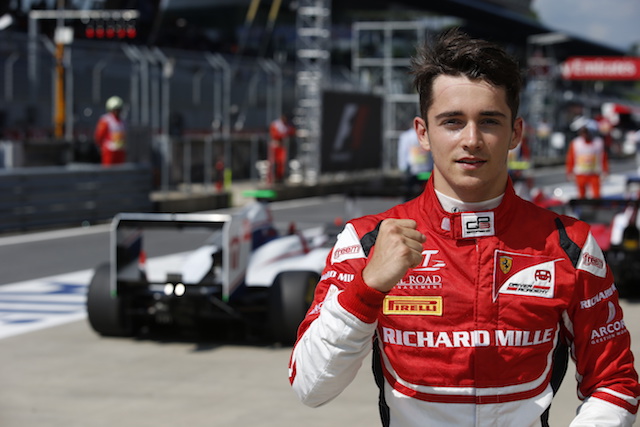 GP3 points leader?Charles Leclerc?notched up his first pole position in the series in qualifying at Spielberg by a commanding margin of half a second.

Leclerc – who will make his Formula 1 practice debut with Haas at Silverstone next week – had topped both days of testing at the Austrian circuit earlier in the month as well as Friday practice, but on those occasions the field was extremely closely-matched, with 22 of the 23 cars covered by less than a second in practice.

Most of qualifying was an in-house battle at ART Grand Prix between their four fast drivers, but in the closing stages?Leclerc delivered a hammer blow to move seven tenths clear of the rest.

Team-mate?Alex Albon responded by shaving a couple of tenths off that advantage, but that was as close as anyone would get.

While Leclerc finished up 0.526s clear, Albon and the 18 drivers behind him were covered by less than nine tenths, with?Nyck de Vries?the closest of them in?third.

Ralph Boschung recovered from a final-corner off to deny ART a sweep of the top four places, beating Honda protege?Nirei Fukuzumi to fourth in his Koiranen-run car.

Matt Parry took sixth in another Koiranen car followed by Jenzer’s?Oscar Tunjo, who won race two in Austria 12 months ago.?Jake Dennis and?Jake Hughes were next, with the latter’s DAMS team-mate?Santino Ferrucci?rounding out the top 10.

Giuliano Alesi has been ruled out of the weekend on medical grounds after a heavy impact with the barriers in practice.