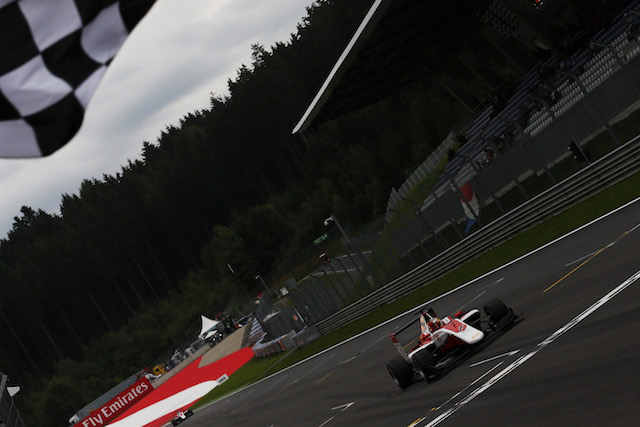 Charles Leclerc recovered from a poor start and survived a sudden downpour to score his second GP3 win in race one at Spielberg, with ART claiming a first ever podium lockout.

The dominant pole-sitter was slow off the line, allowing fellow Barcelona winner to take the lead and Ralph Boschung sweep around the outside into second as Leclerc hemmed Nyck de Vries in.

Leclerc immediately fought back at Boschung into Turn 2, and?as he braked late he almost tagged Albon.

He got a better exit from the corner than the British-born Thai and managed to make a pass stick for the lead into Turn 3.

After an early virtual safety car (to recover the car of Jake Dennis?that had stopped after he was spun around at Turn 1 by a sideways Santino Ferrucci),?the Ferrari scholar?and soon-to-be Haas practice driver opened up lead of?more than five seconds.

However, heavy rain at Turn 2 threatened to turn things upside down, particularly when Leclerc ran deep there when he first encountered it. Team-mates Albon and de Vries did exactly the same moments later though, and the gaps between them simply increased.

Leclerc had a second trip into the Turn 2 run-off a few laps later but had enough in hand to win by 2.2 seconds over Albon while de Vries made it a 1-2-3 for ART, the first such result for any team in GP3 history.

Christian Horner, who founded rival team Arden, handed out the trophies on the podium.

Oscar Tunjo had a great race to climb up to fourth with only a few laps remaining despite both his wing mirrors having collapsed, but the stewards took exception to that and handed the Colombian – who won?at the circuit 12 months ago – a black-and-orange flag, forcing him to pit.

Boschung therefore took fourth in front?of Leclerc’s Ferrari stable-mate?Antonio Fuoco, who opportunistically passed Jake Hughes at the VSC restart and made his way past?Matt Parry when the rain began to fall.

From fifth on the grid, ART’s remaining driver?Nirei Fukuzumi?ended up seventh ahead of Hughes, with the pair to form the front row for race two.