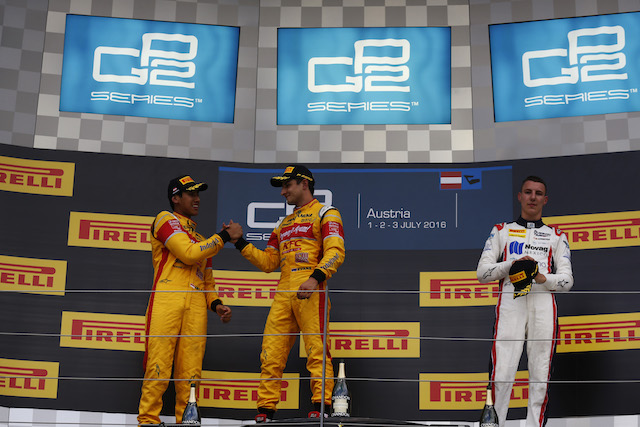 Mitch Evans?picked up victory in an unlikely one-two finish for Campos Racing in a crazy GP2 feature race at Spielberg.

The Kiwi, who had yet to finish on the podium since joining the Spanish squad for his fourth season in GP2, benefitted from being one of the only drivers to start on the supersoft tyre and pit in the early laps for a set of softs.

Through a?safety car period and heavy rain in parts of the circuit,?Evans was able to?catch the leading pack, and he inherited the lead under a second safety car period, which then became a red flag.

After the restart, Evans was able to pull away from team-mate?Sean Gelael, who also pitted early, and took victory by 4.6 seconds.

Gelael, who only scored his first points in the chaotic Baku feature race a fortnight ago, had actually been ahead of Evans in-between the two interruptions, but half-spun at Turn 2 when he caught traffic ahead.

Sergey Sirotkin had made a poor start to the race, allowing Prema duo?Antonio Giovinazzi and?Pierre Gasly to move into first and second.

In a reversal of the end of the Baku sprint race, Gasly chased Giovinazzi and was able to get past on lap six.

The Red Bull Junior?seemed on course to finally end his win drought dating back to 2013, but after rain fell over the first half of the lap, he was the first to get caught out, sliding into the gravel at Turn 3 and triggering the first safety car.

That handed double Baku winner Giovinazzi the initiative, but he gave the lead away to?a charging?Raffaele Marciello?by running wide at Turn 1 soon after the restart.

At this point, the leaders pitted, and while Marciello was able to jump Giovinazzi once more, championship leader Artem Markelov crashed heavily at the pit exit behind them, leading to the red flag.

With all the cars in the pit lane, Giovinazzi stalled at the restart – together with ART stand-in?Rene Binder ahead of him – and the Italian’s car then stopped for good?in the pit exit, delaying the restart while he was moved out of the way.

Now on the grippier supersoft tyres, Marciello quickly made up ground at the restart past some of the earlier stoppers ahead of him, but he finished six seconds behind Gelael. He does however take the points lead after Russian Time team-mate Markelov’s?non-finish.

Luca Ghiotto enjoyed the best showing of his GP2 career to date, racing fellow Italians Giovinazzi and Marciello for the lead in the middle of the race and finishing up fourth.

After a poor start,?Oliver Rowland?was on a charge in the difficult conditions. Like Marciello and Ghiotto, he passed early stopper?Jimmy Eriksson?after the red flag, but Eriksson was able to regain fifth?place on his soft tyres before the end.

Norman Nato pitted for wet tyres at the first safety car, but the track was dry enough in the rest of the lap that this gamble didn’t pay off. The red flag allowed him to catch back up to the pack and he took seventh ahead of Sirotkin, who just went backwards as the race went on.

While?Gustav Malja and?Jordan King completed the top 10,?Alex Lynn was the final finisher on the lead lap in 13th. Having almost slid?into the beached Gasly at Turn 3 he followed Nato into the pits for wet tyres, but then lost out when he was caught by the second safety car.