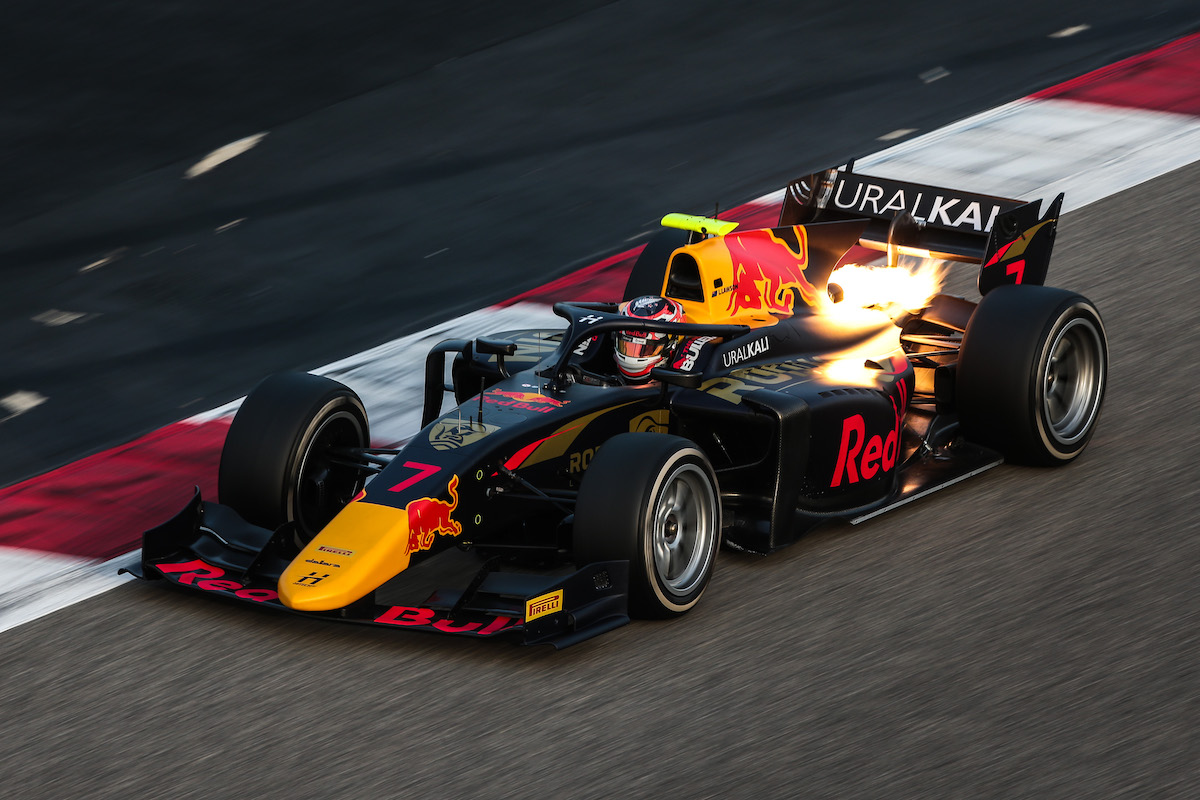 Liam Lawson claimed a debut Formula 2 victory in the opening race of the 2021 season, after fending off fellow Red Bull-junior Jehan Daruvala in the first of two reversed-grid sprint races in Bahrain.

Lawson moved from third to first place on the run down to Turn 1 on the opening lap, passing reverse-grid polesitter Theo Pourchaire and Charouz Racing System’s David Beckmann.

Hitech GP’s Lawson set the fastest lap on the second tour to build an early race lead, while Pourchaire and Beckmann squabbled for second place. Pourchaire emerged in front and he held that position until his ART Grand Prix-run car ground to a halt with 10 laps to go.

Lawson’s main challenger then became Carlin’s Daruvala who had dispatched Beckmann around the outside of Turn 4 at the halfway stage in the race.

Daruvala rapidly closed to within a second of Lawson but he couldn’t find a way of denying Lawson a victory on his F2 debut. Daruvala was forced to settle for his third F2 podium – all of which have come in Bahrain.

On his F2 debut, Beckmann claimed the final place on the podium, keeping the Prema duo of Robert Shwartzman and Oscar Piastri at arm’s length all-race long.  Reigning FIA Formula 3 champion Piastri attempted to pass Shwartzman at Turn 4 late on but the highest-placed returning F2 driver swept into the corner and claimed his fourth-place finish – from 11th on the grid.

ART GP’s Lundgaard had a muted run to sixth place ahead of Carlin’s Dan Ticktum, who drops to eighth place in the final classification after he picked up a five-second time penalty for colliding with MP Motorsport’s Richard Verschoor at Turn 1.

This promoted the feature race polesitter Guanyu Zhou (Virtuosi) to seventh place, with Ticktum taking eighth place ahead of Lirim Zendeli and Lawson’s team-mate Juri Vips – who charged from the back of the grid to take reverse-grid pole for the second sprint race.

There was heartbreak for Guilherme Samaia, who was set for his first F2 points finish and a place at the front of the grid for the second sprint race, before a five-second time penalty for a VSC infringement dropped him to 12th behind Trident’s Bent Viscaal.

Ferrari junior Marcus Armstrong suffered a miserable start to the season as his car terminally slowed on the exit of Turn 1 and was collected by F2 returnee Ralph Boschung (Campos), who ran into the back of his DAMS-run machine and then stopped too.