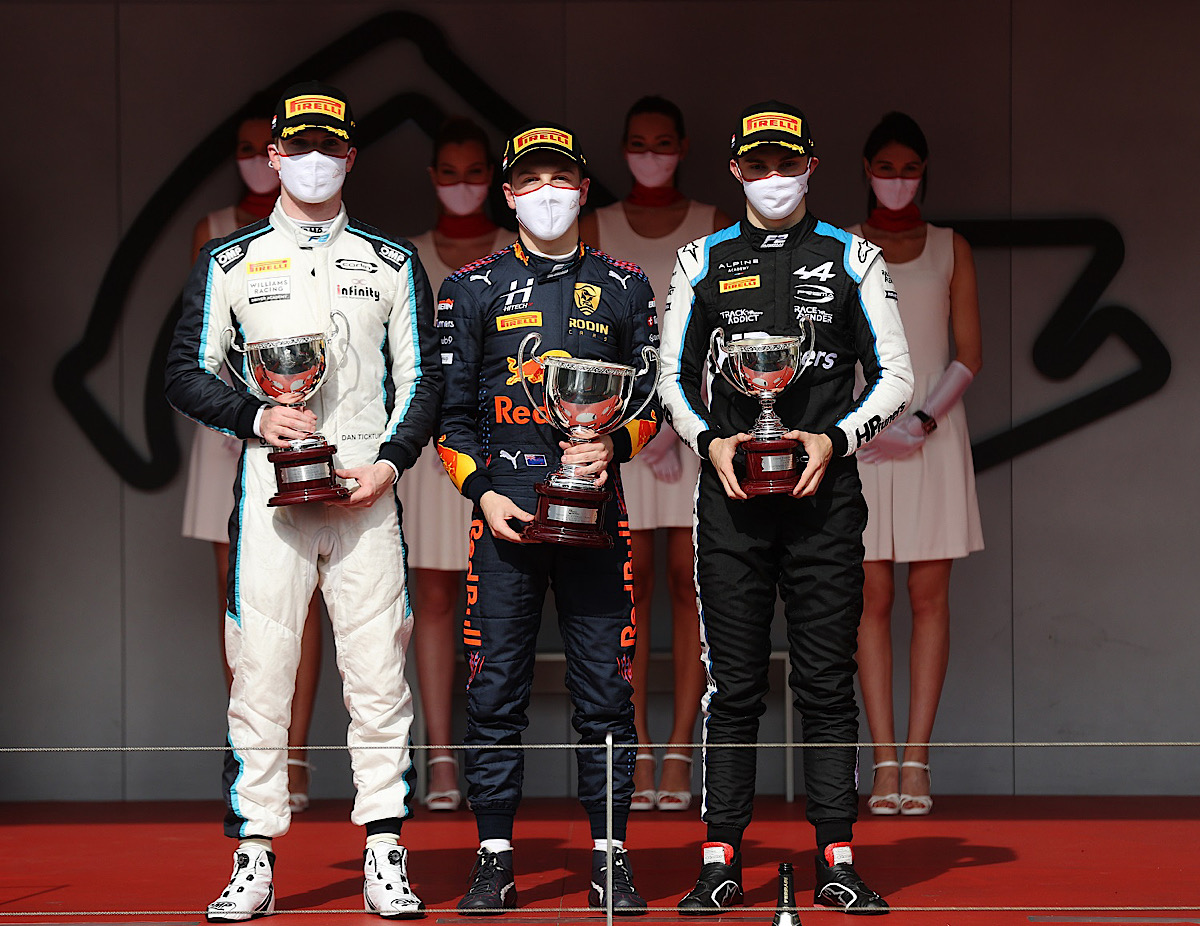 Lawson took victory on the road after an audacious move on Prema’s Oscar Piastri early in the race but was later under investigation for a technical irregularity. He was deemed to have used an illegal throttle mapping during the race start.

The result promotes Dan Ticktum to his second F2 victory. It also promotes Piastri into second and Hitech’s Juri Vips to his first podium of the season after a combative performance in the race.

The relevant FIA document read: “The stewards examined the data evidence. They summoned and heard the driver and team representative and the FIA technical delegate. A defined throttle pedal progressivity map programmed in position 1 of the steering wheel throttle map rotary knob must be used during all formation lap starts and race starts until the car speed reaches 50 km/h.

“Car 07 [Lawson] used a different throttle map at the race start. Having considered the matter extensively, the stewards determined that Car 07 was therefore in breach of the technical regulations and is therefore disqualified from the results of race two.”

Lawson and Hitech have a right to appeal the results. As Saturday afternoon’s feature race is determined from qualifying performance, he will start that race from 12th.

After taking victory, Lawson said in the post-race press conference that “I didn’t get off to a great start, I had too much wheelspin” and that “I think I just had too aggressive a clutch map, and just got [the] wheelspin from that”.

Prema’s Robert Shwartzman, who stopped for slick tyres towards the end of the race, is elevated into the top 10 and thus picks up the two points for fastest lap.

That brings him up to eighth in the standings, while Lawson drops to fourth behind Ticktum and Piastri. Virtuosi Racing’s Guanyu Zhou now leads Ticktum by 18 points.

“It is unfortunately pretty simple really – there is a throttle map you must be in for starts as a rule,” Oakes explained to Formula Scout.

“Drivers pull away in it then use another map for normal driving. So on the formation lap and back to the race start he just didn’t go back to the correct toggle position fully.

“It happens – its an innocent mistake and more frustrating it is actually why he had a poor start off the line and hard to do the hard work to get back in the lead with a mega overtake. With it being a wet race and [Marus] Armstrong not lining up I think it was missed with lots going on.

“We all feel for him as he drove an amazing race, they were some tricky conditions, a stunning overtake and then kept enough life in the tyres to keep Ticktum comfortably at bay. So to have that taken away must hurt.”