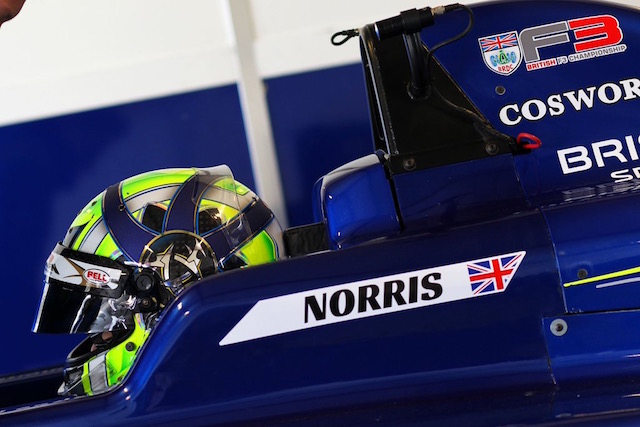 With a good start from?pole position, MSA Formula and Toyota Racing Series champion Norris was able to build a lead of four seconds by the end of?the opening lap.

As the positions behind him changed hands, with Finland’s Aleksanteri Huovinen charging from sixth to second, Carlin driver Norris quickly opened up his advantage to seven seconds, where it remained in the middle of the race.

As the track dried, Norris – who will only be present at six out of eight rounds during the year – improved his lap time on every tour, and while Huovinen faded, he was able to stretch his margin from 11s to 19s over the final two laps.

Double R driver Huovinen, who has arrived from SMP F4 over the winter, rose from sixth to third on the first lap and then passed?Toby Sowery, who had himself climbed from fourth to second on lap one but had fallen?back to fifth by the end of lap three.

Ricky Collard had started on the front row alongside team-mate Norris but went back to fourth off the start. He took third from Sowery on lap three but he succumbed to?Enaam Ahmed on lap eight, with the Douglas Motorsport man completing the podium.

Behind Collard and Sowery,?Ben Hingeley had a strong first race out of Formula Jedi, rising from 14th to sixth for HHC Motorsport.?Jan Jonck was seventh ahead of?Enzo Bortoleto?and?Sisa Ngebulana, who came from 15th and 20th on the grid.

Matheus?Leist claimed 10th on the final lap. He fell back to that position from fifth on the first lap and had recovered to eighth by the end of lap one, before he and his 2015 MSA Formula team-mate?Tarun Reddy fell to the back of the pack after an apparent coming together.

Update:?Collard was given a three-second penalty after the race for gaining an advantage when passing Sowery, dropping him to fifth behind the Lanan driver.