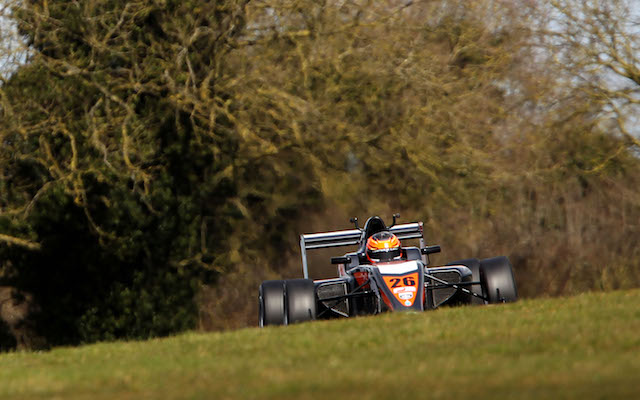 Matheus Leist stormed from 10th to first?inside the opening?two laps to win the second race of the BRDC British Formula 3 curtain-raiser?at Snetterton.

The race took place around?four hours later then planned after earlier rain forced a shake-up of the timetable, but the track did dry in that time.?Although it was a reversed-grid race, Brazilian driver Leist started?from his race one finishing position of 10th following an eventful run on Sunday.

He climbed as far as fourth on lap one, as compatriot and Double R team-mate?Enzo Bortoleto led a from pole with Danish SWR man?Jan Jonck?and Douglas Motorsport’s?Enaam Ahmed?fighting over second.

By the end of lap two, Leist was into the lead, but was prevented from pulling away from the pack by a safety car intervention, with?Ricky Collard,?Tarun Reddy and?Omar Ismail?all eliminated from the race.

Three laps remained after the restart, with Leist able to quickly move over a second clear of the chasing Ahmed as the former MSA Formula driver secured his third win in British racing.

Ahmed followed his third place from race one with second, while?Toby Sowery completed the podium after passing Bortoleto at the restart. The Lanan driver posted the fastest lap on the final tour to claim pole for race three ahead of Ahmed and Leist.

Sisa Ngebulana worked his way from eighth to fourth within two laps of the restart, but was repassed by?Aleksanteri Huovinen on the last lap.

Dominant race one winner?Lando Norris was a relatively muted sixth but set a?good enough time on the last lap to claim fourth on the grid for the finale ahead of Australian?Thomas Maxwell, who finished the race seventh.

Bortoleto and Jonck slipped back to eighth and 10th respectively, split at the finish by P20-starter?Thomas Randle.