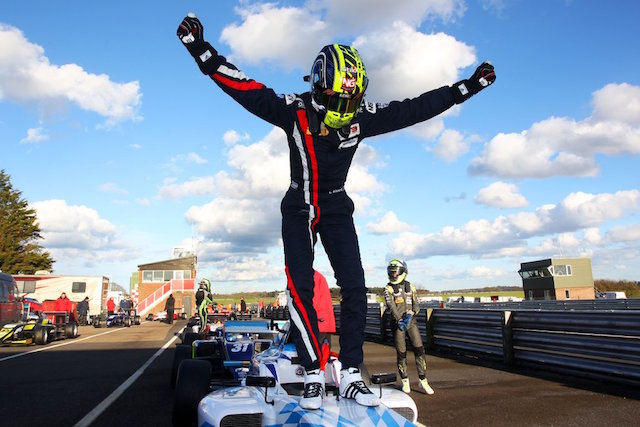 Enaam?Ahmed?triumphed in a five-car battle for victory in the final race of the BRDC British Formula 3 opener at Snetterton to leave with?the standings lead.

Second-place starter Ahmed made?a better getaway than poleman Toby Sowery to take the lead and he held onto it until the end.

The Douglas Motorsport driver was never able to break clear of his chasers though. His lead over Sowery was just a quarter of ?second with two of the 10 laps remaining, and?Lando Norris,?Matheus Leist and Thomas Randle were all within a second and a half.

Ahmed responded to win by 0.48s, and having improved his results from third to second to first during the weekend’s three races, he leaves Norfolk with a seven-point lead over his fellow 2014 world karting champion and dominant race one winner Norris.

Norris passed race two winner Leist for third on lap three and was immediately onto Sowery’s tail, but he ultimately had to settle for?third. While Leist took fourth, Ahmed’s team-mate Randle claimed fifth to complete a strong recovery from damage sustained on the first racing lap of the weekend.

A more distant eighth was?Ricky Collard, who fought his way through from 19th on the grid after his retirement early in race two.?Thomas Maxwell?struggled for pace after starting fifth and ended up ninth ahead of?Ameya Vaidyanathan.