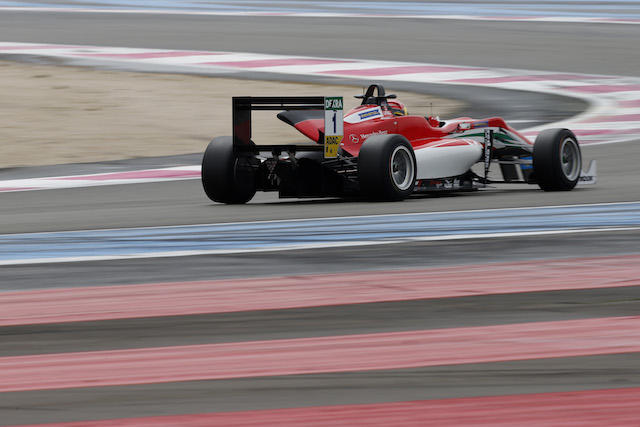 Lance Stroll?kicked off his FIA Formula 3 European Championship title bid with victory in race one at Paul Ricard despite a slow getaway.

The Canadian was beaten off the line by his Prema team-mate?Nick Cassidy, but was into the lead by the start of the second lap.

It looked as if?Stroll was able to go?past Cassidy fairly easily down the straight, a move that hardly?disproves the theory that the New Zealander won’t be free to fight?his team-mate this year.

George Russell completed the podium at the start of the first full season for the HitechGP team, seven seconds down on Stroll. Russell will have to start the weekend’s remaining races from the back after being excluded from second qualifying for not having enough fuel in his car.

His team-mate Ben Barnicoat?was the leading debutant in fourth place, seeing off a mid-race challenge from?Maximilian Gunther, the man who will start the next two races from pole.

Formula 4 graduates?Joel Eriksson,?Ralf Aron?and?Niko Kari?completed the top eight. Kari started third on the grid but was slow away and knocked his Motopark and Red Bull Junior stable-mate?Sergio Sette Camara into a spin at Turn 1.

Harrison Newey?was another with a strong F3 debut, taking ninth as the lead Van Amersfoort Racing driver ahead of team-mate?Callum Ilott, who charged from the back of the grid after an engine change following a fire on Thursday – he’s also using a chassis borrowed from T-Sport.

Mikkel Jensen?made a slow start from fourth on the grid and dropped to the back before recovering to 13th behind?Pedro Piquet?and?Alessio Lorandi.